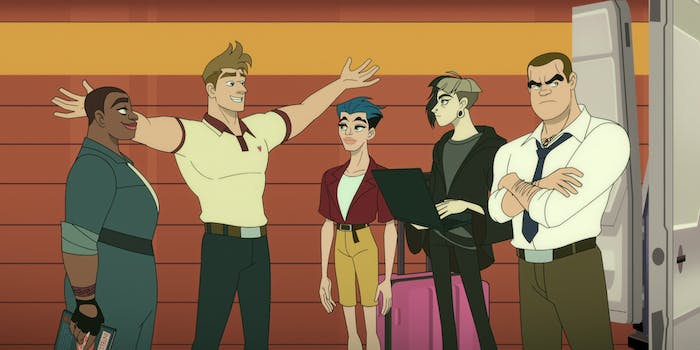 Everyone is dunking on ‘Q-Force,’ Netflix’s cringeworthy LGBTQ+ cartoon

People are joking that the trailer is so bad it made them straight.

Netflix has listened to the widespread demands for more queer representation on TV, launching an adult animated sitcom about a team of LGBTQ+ spies. It’s a queer satire of James Bond, a concept that sounds pretty cool at first glance. Unfortunately, the first trailer for Q-Force (yes, that’s the actual title) looks kind of cringeworthy, focusing on stereotypes and unfunny one-liners. It provoked widespread mockery as soon as it arrived on Twitter—mostly from queer people joking that watching the trailer made them straight.

Q-Force has a gay showrunner (Gabe Liedman, a writer on sitcoms like Brooklyn Nine-Nine and Broad City), and includes several LGBTQ+ voice actors like Wanda Sykes and Sean Hayes. The show is walking the walk in terms of queer representation, both behind the camera and on-screen. However, this doesn’t guarantee that Q-Force will be good.

While no one has actually seen the show itself, a lot of people have already made up their minds based on the trailer. Netflix’s LGBTQ+ account @Most is clearly struggling to find positive comments with more than a couple of retweets, while posts mocking the show are spreading like wildfire:

Basically, this trailer has a very powerful “Hello, fellow kids” energy. Featuring characters named Twink and Mary, it feels dated and corny; about as sophisticated as the 1990s Ambiguously Gay Duo cartoons. The fact that it includes queer people among the creative team is immaterial in that regard—especially in the light of Netflix success stories like Sense8, Queer Eye, and She-Ra, all of which were led by LGBTQ+ creators.

Maybe Q-Force is better than its trailer makes it look. But right now, it seems destined to join the ranks of mediocre adult animated sitcoms, a subgenre usually dominated by straight people. Groundbreaking!