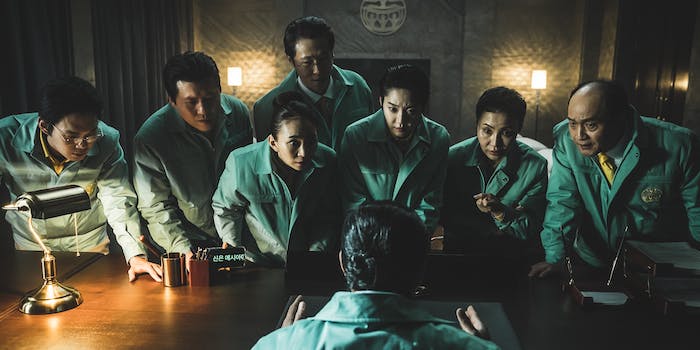 Netflix’s ‘Hellbound’ is a brilliant new thriller about religious extremism

This Korean horror-drama begins with 'sinners' being dragged to hell by demonic monsters.

This review includes some general spoilers for the early episodes of Hellbound.

The cartoonishness of Hellbound’s demons is a feature, not a bug. Netflix’s new hit miniseries offers up a fantastical premise, and proceeds to take it very seriously: What if demons appeared on Earth and dragged sinners to Hell? In practice, this process looks absurdly schlocky. First, a disembodied head materializes and tells someone that they’re “bound for hell.” Then at the allotted time, a trio of muscular CGI monsters beat this person to a pulp and incinerate the body. It’s divine punishment by way of the Incredible Hulk.

Some viewers find this introduction offputting, but there are plenty of reasons why Hellbound became a knockout hit last week, finally dethroning Squid Game as Netflix’s most-watched series. With a keen eye for the irrational side of human nature, it explores why people turn to reactionary beliefs in the face of disaster.

Objectively, the characters of Hellbound have very little information to work with. Although the initial “decrees” namecheck Hell, there’s no explicit message attached to the resulting deaths. The demons themselves do not speak or communicate. But since this story takes place in South Korea, where Christianity is a dominant religion, the resulting cultural upheaval is rooted in Christian ideals. Created by Yeon Sang-ho (Train to Busan), this tale is a disturbing work of speculative fiction, combining vicious social commentary with a gripping supernatural mystery.

Jin Kyung-hoon (Yang Ik-june) is the show’s introductory protagonist, a police detective investigating the first public example of someone being dragged to hell. The cops struggle to analyze the evidence at hand: A violent homicide with seemingly non-human perpetrators, witnessed by dozens of people. Meanwhile, the media turns to the one person offering a confident, expert-sounding explanation: The eerily self-assured religious leader Jeong Jin-soo (Yoo Ah-in), whose group resembles cults like Korea’s infamous Shincheonji Church of Jesus. He claims these deaths are demonstrations of God’s will, punishing people for their sins.

This explanation quickly takes root because it plays into people’s underlying beliefs. We want to find meaning in the face of tragedy. We want to believe that only bad people deserve suffering and that good people can avoid it. So instead of treating the demons as Godzilla-like interlopers, the public accepts their existence on religious terms. Their cartoonish lava-gorilla appearance becomes imbued with spiritual meaning, simply because they inspire fear. And so Jeong Jin-soo’s doctrine rapidly takes hold, militarized by a vigilante group known as the Arrowhead, who operate with targeted violence to punish supposed evil-doers. Their storyline involves some of the most convincingly scary depictions of doxxing I’ve seen on-screen, illustrating the alarmingly short distance between some theatrical weirdo yelling invectives online and their targets being mobbed IRL.

While the story’s eventual conclusion is a little too neat for my tastes, Hellbound is one of the best genre shows on Netflix this year. It certainly outstrips the laborious pacing of Midnight Mass. Firmly rooted in reality, Hellbound has plenty to say about the viral spread of cults, preying on people from every demographic. In just six episodes, we see society transform in a worryingly plausible manner, led by an ensemble cast including underground activists, cult enforcers, journalists, and everyday victims of a bizarre, hellish, ultimately inexplicable phenomenon.