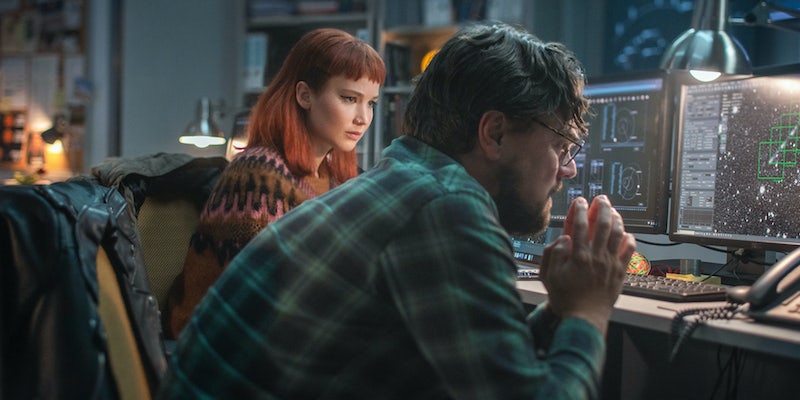 Two years into an unceasing pandemic, we’re at a point where any mention of asteroids or meteors potentially coming near Earth are met with sarcastic tweets welcoming annihilation. Don’t Look Up, a dark comedy about a comet hurtling towards Earth, feels like the star-studded, multimillion-dollar version of those tweets.

With six months to redirect the comet, the two get swept away to the White House, where chain-smoking President Orlean (MAGA Meryl Streep) and her spawn-of-staff Jason (Jonah Hill) take turns discounting and reframing their Earth-shattering discovery. Then they take it to the media, who are similarly indifferent. (Cate Blanchett and Tyler Perry as the bantering hosts of a daytime talk show is inspired casting.)

In a devastatingly accurate subplot, the comet is named after Kate, who discovered it, but it’s instead attributed to the more media-friendly (and handsome) Randall, and people start blaming Kate for the comet. Throughout, McKay tries to disorient, cutting in scenes of nature and traffic and upheaval, as Nicholas Britell’s score tightens its grip.

Still, Don’t Look Up is a little too confined to how Twitter would react to this news; the quickly produced memes of Kate and Randall, the video reactions to the comet. You can almost hear McKay screaming: Don’t look up… from your phones, sheeple! With its many zoom-ins and reaction shots, it feels like it could exist in an episode of Succession (which McKay produces), where the media elite gather in their boardrooms, discussing how an extinction-level comet serves their interests.

At the center of all this is Bash, a social media conglomerate headed by childlike CEO Peter Isherwell (Mark Rylance). Their tech is ubiquitous, and Bash plays a major part in the fate of the comet. Perhaps more backstory on its rise or how the socially stunted Isherwell came to be would have helped prop up that narrative.

The casting is great, but some of the bit roles—Ariana Grande and Kid Cudi as a celeb couple, Timothée Chalamet as a spiritual skater boi—feel half-sketched, designed perhaps to get younger eyeballs on the film. DiCaprio gets in a few worthy rants, and he and Lawrence both do a good job conveying the helplessness and disbelief. (There’s a funny callback involving Kate’s grievance about being charged for chips that are free at the White House.) But McKay’s penchant for blunt-force interjections takes away from their more nuanced portrayal.

This is supposed to be a climate change movie, and it’s obvious what McKay and co-writer David Sirota’s Big Metaphor is here, even though the script was written before COVID-19. Ultimately, the film wags its finger without offering any compelling arguments to back it up. (Much like Twitter.) Aside from Dr. Teddy Oglethorpe (Rob Morgan)—a main character with a high-level job at NASA who gets no real agency or input—we don’t see any other scientists or astronomers in the film. Maybe that’s purposeful. Elsewhere, Americans become divided into “don’t look up” and “just look up” camps, but the caricature is so heavy-handed, I was welcoming the end.

As for the end of the film (before the credits), it holds the most emotionally resonant moment. It just comes much too late.