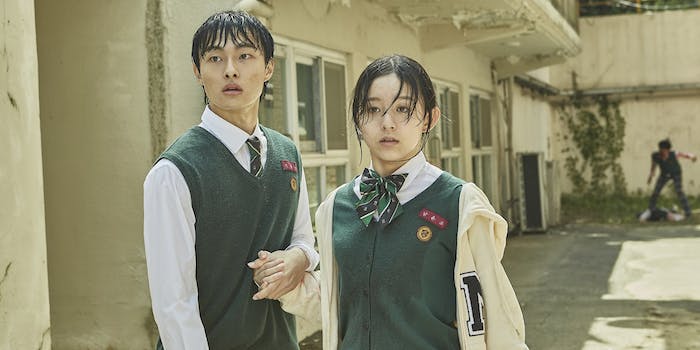 All of Us Are Dead/Netflix

This Korean thriller series is an impressive feat of survival horror and clever action choreography.

After watching the nail-biting first act of All of Us Are Dead, you may wonder how the hell it can keep up the pace for 12 episodes. Miraculously, it does. Adapted from a Korean webtoon, this teen thriller series is a wildly entertaining addition to the zombie genre, featuring unique, terrifying action sequences and a fantastic ensemble cast.

All of Us Are Dead

Trapped inside a high school, the main characters are a group of teens who find themselves at the epicenter of a zombie outbreak. We begin with a deceptively traditional teen drama preamble—bullies, love triangles, academic stress—before the zombies arrive, spreading with alarming rapidity across the school. By the end of episode 3, so many alleged “main characters” are dead that you begin to wonder if the show’s title should be taken literally.

Propelled by an endless supply of cliffhangers, All of Us Are Dead is a top-tier survival thriller. Intellectually, we know the heroes can’t possibly reach safety halfway through the season. But the pace is so engaging that this kind of logical thinking goes out the window. We’re kept on the edge of our seats as the kids flee from peril to peril, interspersed with quieter moments of emotional bonding. Elsewhere, the adults are (for the most part) useless. The show is pretty explicit in its message that authority figures have no interest in helping these kids survive, mirroring the teens’ experience of everyday life. Abandoned by the government, the school deteriorates into an amped-up Lord of the Flies.

Among the lead cast, we have On-jo (Park Ji-hu), a sweet-natured girl whose father is a firefighter. Her friend Cheong-san (Yoon Chan-young) has a crush on her and is handling his feelings with an amusing lack of finesse. Their athletic classmate Su-hyeok (Lomon) becomes one of the show’s action heroes, in a squad including studious class president Nam-ra (Cho Yi-hyun), wealthy mean girl Na-yeon (Lee Yoo-mi), and at least a dozen others. Sadistic bully Gwi-nam (Yoo In-soo) is the main non-zombie antagonist, a monstrously hateable figure.

Writer Chun Sung-il and directors Lee Jae-kyoo and Kim Nam-su deliver a dizzyingly imaginative array of action sequences, with a keen eye for practicality. You can only imagine the discussions they must’ve had about wringing every possible use out of the school’s furniture, stairwells, windows, sports equipment, et cetera.

Aside from a few kids who are experienced fighters, most of the students don’t have an instinct for violence. So while improvised weaponry is a staple of the zombie genre, the emphasis here is on escape and survival. The kids build barricades and strategize over escape routes while facing a constant barrage of new obstacles.

One of the first big setpieces takes place in the cafeteria, where the sprinkler system turns the floor into a slippery deathtrap. Later on, there’s a bit with some library bookshelves that had me leaping out of my seat. And all of this is grippingly well-shot and edited, keeping things ticking as we move between interpersonal drama and nerve-racking action. (The zombies themselves, BTW, are satisfyingly revolting, particularly the bone-cracking sound effects when infection sets in.)

As the students make their way through the zombie-infested school, I found myself feeling immensely proud of their ingenuity, selflessness, and ability to cooperate in the face of untold horrors. They struggle through plenty of classic zombie tropes (What if someone in your team is secretly infected? Would you sacrifice yourself to save a friend?) but the writing is smart and sensitive enough to avoid feeling like a retread.

Two weeks out from its initial release on Jan. 28, All of Us Are Dead is now the #1 show on Netflix—and for good reason. Unless you’re grossed out by all the gore (which: fair enough!), it’s compulsively watchable stuff.