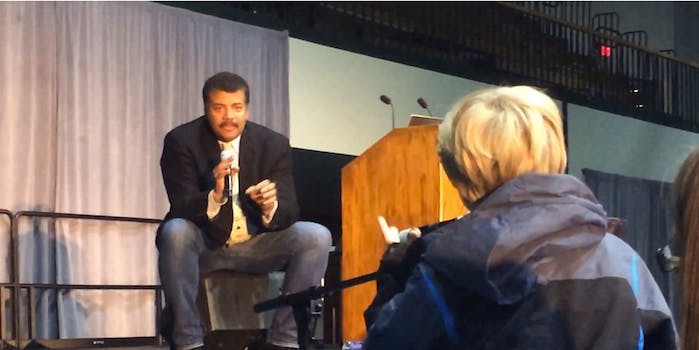 Neil deGrasse Tyson inspires another scientist in the making

Where was he when we were stumbling blindly through physics class?

If you ever find yourself at a Neil deGrasse Tyson lecture, always stay until the very end. That last question may change how you view the world.

Astrophysicist Tyson has been on a roll lately with his traveling lectures. Last month he blew the mind of an 8-year-old girl who wanted to go into the sciences, and just last week he stopped his lecture to prove to the audience at Florida State University that Bill Nye was his best friend.

This time, he stopped at Grand Valley State University in Allendale, Mich. to talk about space travel. As at many of his lectures, he held a question and answer session with the audience after he finished his presentation.

Nine-year-old Jacob was the final question of the night, and, with a folder of notes in hand, he wanted to know why humans couldn’t just shoot something at an asteroid to skew it off its collision course with the Earth.

Tyson sat on his level as they discussed asteroid physics and ignored the rest of the audience. He explained that shooting at an asteroid wasn’t a very good idea without patronizing Jacob, who showed that he already knows a thing or two about physics.

The next generation of scientists is in very good hands.