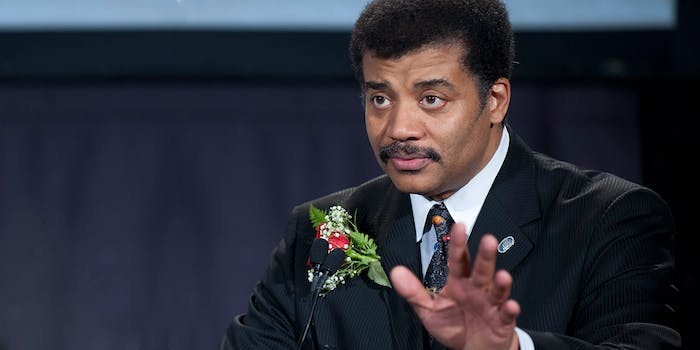 His words are inspiration to us all.

Scientist and educator Neil deGrasse Tyson further cemented his position as all-round amazing guy with some inspiring words for a 6-year-old who wanted to do her part to save the world.

Tyson was giving a lecture to a packed hall at the College of the Holy Cross in Worchester, Ma., when the young girl asked him how first-graders like her “can help the Earth.” His response should inspire everyone, no matter how young or old, to pitch in to keep our planet healthy.

Neil deGrasse Tyson: You know what I think? Okay, so when I was in first grade I was curious about a lot of things. So heres what I want you to do… I think, when you go home, and you start poking around the kitchen—have you ever done that? Have you ever opened the cabinets, and pulled out the pots and pans, and started banging on them? Is that cool? That’s fun, right? Yeah? Did your parents stop you? Yeah?

Tell them to not stop you.

Because you’re just being a kid, and you like to explore things, and your parents don’t like it because it gets the pots and pans dirty, and because it’s noisy—but for you it’s fun, you’re testing. You’re actually doing experiments: What does the wooden spoon sound like on the aluminium pot, or the metal ladle sound like on the steel pot? They all make different sounds, and it’s fun, right?

Okay, nothing thing—so if it’s raining out, there’s a big puddle—what do you want to do with that puddle?

Girl: Jump in it.

Tyson: You wanna jump in it… so do you parents let you jump in it?

Tyson: Well tell your parents Doctor Neil deGrasse Tyson said you should jump in the puddle.

[Editor’s note: At this point Tyson did a rolly-poly.]

Because when you jump in a big muddy puddle—first, it’s fun right? It’s completely fun, and you’re making a splash crater. So, these are experiments. Just tell your parents that they’re experiments, and you want to become a scientist, and then they won’t stop you from doing anything you want.

So there you have it, kids. Don’t tidy your rooms—it’s an experiment.