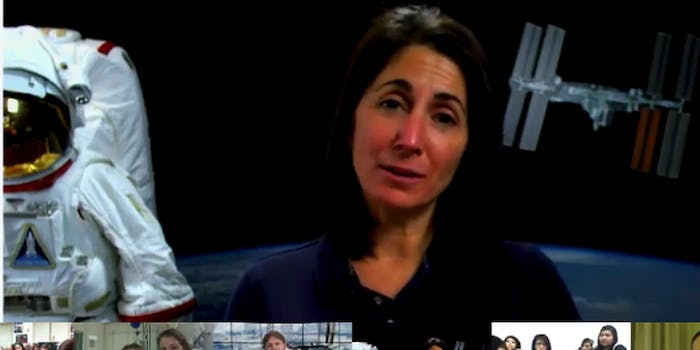 NASA astronauts on the International Space Station—and some on the ground—took questions in front of an online audience of more than 7,000 people.

Today more than 7,000 people joined a selection of NASA astronauts in a Google+ hangout to discuss what it’s like to go into space.

Questions came in from around the world, to be answered by astronauts Ron Garan and Nicole Stott on earth, and Kevin Ford, Tom Marshburn and Internet favorite Chris Hadfield live from the International Space Station.

Questions were submitted via YouTube, Google+ and the Twitter hashtag #askAstro, spanning a range of subjects from the specifically scientific to what day-to-day life is like on the Space Station. A lot of emphasis was put on the inspirational influence of the space program, with both earthbound astronauts—now in their 50s—citing the Moon Landing as a pivotal moment in their career path into space. As Garan put it, “I didn’t want to be an astronaut until July 20th, 1969.”

YouTube science channel SmarterEveryDay had an interesting practical question for the astronauts onboard the ISS: Is it possible to twist your body in zero gravity in the same way that a cat twists around in midair to land on its feet? The answer is yes, as astronaut Tom Marshburn was happy to demonstrate.

Zero gravity was a popular topic. For example, are dreams effected by the experience of living and sleeping in space? According to Nicole Stott and Ron Garan, zero gravity dreams often incorporate the sensation of falling or floating—but unlike with ordinary dreams, the feeling doesn’t go away after you’ve woken up.

As for the physical effects, many aspiring astronauts were curious about how the human body deals with living in space. Stott described how many people end up with puffy faces and spindly legs when they travel to the Space Station, due to the different ways the body’s fluids shift in zero gravity. And rather more disturbingly, the lack of regular ground exercise means that “your body thinks it doesn’t need a skeleton any more, and tries to get rid of it.” However, with proper exercise there is not necessarily any limit to the length of time an astronaut might remain in orbit.

Thanks to the success of Chris Hadfield’s regular Twitter and YouTube posts from the Space Station, some social media-related questions were inevitable. Responding to a YouTube message from a schoolteacher in Australia, Hadfield seemed eager to share his enthusiasm for his work, saying:

“I don’t think anyone tries to use technology to push the boundaries of the human experience as much as we do… We are, for the first time in history, leaving Earth. It’s too good an experience not to share.”

As for the many photos Hadfield posts on his Twitter feed, another YouTube participant had some technical questions about how difficult it is to take pictures in space. Hadfield explained that lighting is a major issue, as “space is a bottomless pit of deep black, so black it almost has a texture to it,” but the astronauts do receive help from experts — and it’s easier for them to operate bulky cameras because the camera’s weightlessness eliminates the need for a tripod.

After half an hour of conversation with the men currently orbiting Earth, it was time for a couple of closing questions with Garan and Stott. A classroom of Life Sciences students in Tyrone, Pennsylvania asked, “What does it feel like to walk on land and breathe air when you return to earth?”

“It feels awesome,” said Stott, smiling, with Garan adding that the first time he returned to Earth after being in space, his capsule landed in Kazakhstan with the window facing the dirt. But as soon as he set eyes on a patch of grass and a flower, he thought: “This is so wonderful, we’re home.” Even though they were in Kazakhstan, home had become Earth.