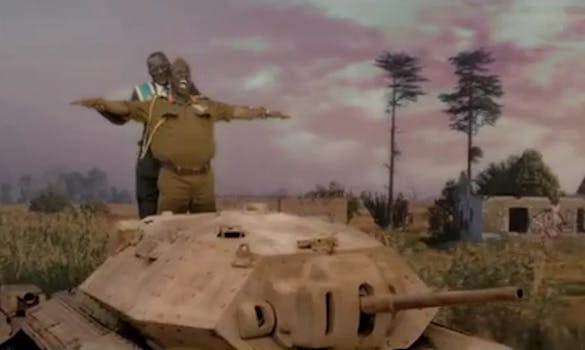 Not even African dictators should dine alone, according to a controversial new ad by the restaurant chain, Nando.

What do African dictators do when they hang out together?

They make sand angels in their boxers, squirt each other with gold-plated water rifles, and mimic Leonardo DiCaprio’s “king of the world” scene in Titanic while riding on the back of a tank—at least according to a controversial new ad.

That’s the premise behind the new campaign for Nando, a South African restaurant chain. Titled “Last Dictator Standing,” the ad, highlighting the new six-pack meal, closes with the phrase “This time of year, no one should have to eat alone.”

Since being uploaded onto YouTube on Nov 24, the video has already been viewed more than 400,000 times and collected more than 500 comments, debating history, apartheid, censorship, political correctness, and the power of comedy for all points in-between.

As the Huffington Post reported, various media outlets have unsurprisingly taken issue with the ad.

“This rubbish will be misunderstood, especially by the young black impressionable kids that end [up] getting sucked to supporting Malema…”  commented, ingo267  on YouTube, clearly offended. “So its important that the media present a balanced satire of all groups.”

Others, like the realist edvard1860, couldn’t help but note some of the dictators died before others came to power, so it would be “unlikely that they would have dinner together.”

“Nobody cares about history, especially when it comes to comedy,” wrote drevil5001.

“This is just generally an awesome video, it’s to be laughed at and enjoyed people need to relax and stop taking it so seriously there really﻿ is no need to start discussing politics and history ….” commented TheZimbo15, in an attempt to keep the peace.

A minute-long version of the commercial, where Saddam Hussein sings karaoke with Chairman Mao, has 200,000 views, and prompted a similar discussion in the comments. (The Mao segment was probably cut as it confuses the message.)

Nando is no stranger to controversial ads. The restaurant was dubbed “cheeky” by AdAge, and during the South African Black Tuesday protests against the new  so-calledSecrecy billl, Nando released their own ad mocking the journalists’ plight.