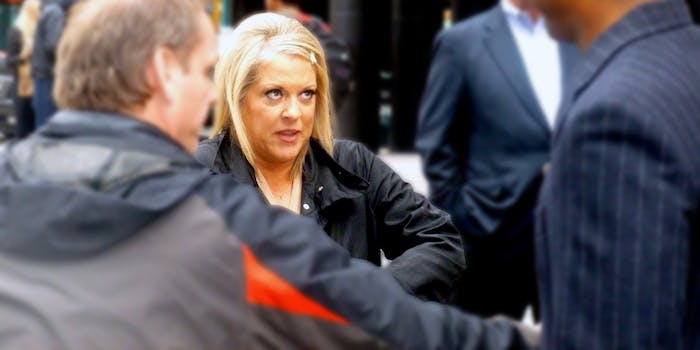 Wondering what Nancy Grace thinks about pot? She is too.

It’s not a huge leap to claim CNN host Nancy Grace is one unhinged talking head, but a new compilation video on YouTube might help to further drive that point home. A video posted to the site on Friday shows that, in order to prove a point, Grace will debate any point and anybody, including her own self.

The video’s called “Nancy Grace Debates Nancy Grace on the Effects of Cannabis,” and it highlights Grace’s differing opinions on Trayvon Martin’s familiarity with weed. Spanning 1:13, the clip cuts around different shots of Grace various days, as her discourse bounces from “all that stuff does is make you lazy” to “Guns don’t kill people, guns held by stoners kill people.”

The Daily Dot’s personal favorite comes late in the video, when Grace jumps between “People on pot kill families” and “The common connotation: pot goes with lethargy; the munchies; with wanting to eat, with being laid back; not chasing somebody down from behind bushes, beating them in the head, and basically starting mortal combat. That’s not what you typically equate with smoking a doobie.”

Well, what is it then, Nancy?!

Grace’s deep dives into the world of weed are well-documented. Last weekend on Saturday Night Live, Drake and a few cast members even made fun of the CNN host’s obsession, depicting her investigation into a marijuana dispensary owned by cast member Kate McKinnon.