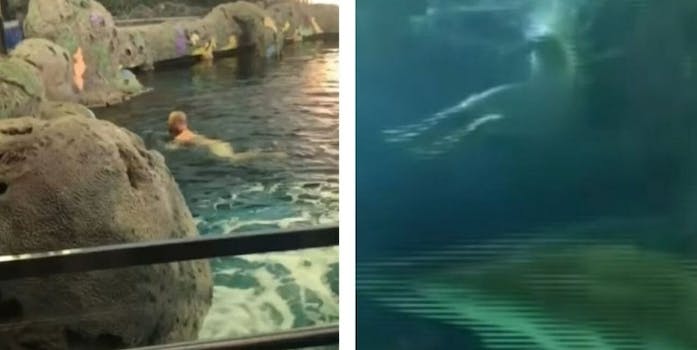 This article contains videos that may be NSFW.

A man walked into a Toronto aquarium last Friday, disrobed, and jumped into a shark tank to swim naked among the sea creatures. But the story took a darker turn Monday when police said he was also wanted in connection with an assault that occurred three miles away from the aquarium, according to the CBC.

Toronto police said the man, identified as 37-year-old David Weaver, left the alleged assault and made his way to Ripley’s Aquarium of Canada where he stripped down and jumped into a tank that held at least a dozen sharks. The crowd around him was shocked. Some were delighted, but others were disgusted.

Here’s the NSFW video from his stunt at the aquarium.

Though the man appeared at one point to be getting out of the tank to end his charade, he then did a back dive into the water, much to the crowd’s delight.

But the aquarium, which said it plans to press charges against Nelson, and police weren’t pleased with the show.

“It put the man’s safety in jeopardy, the safety of the marine animals and the safety of the staff who tried to get him out of the water,” Jenifferjit Sidhu, a spokesperson for Toronto Police Service, told the CBC.

One witness said that “I was scared I was going to witness the death of this guy.”

After he climbed out of the lagoon—which contained a variety of sharks, sea turtles, eels, and other tropical fish—Weaver escaped before police could arrive.

“Whenever you surprise or corner any type of animal, whether it is a dog or a shark, it could potentially bite back, but these are not aggressive sharks like you see on TV,” Peter Doyle, the aquarium’s general manager, told the National Post. “They looked more afraid of him than he was of them.”

Aside from the possible assault charge, police also reportedly will charge Weaver with indecent exposure.