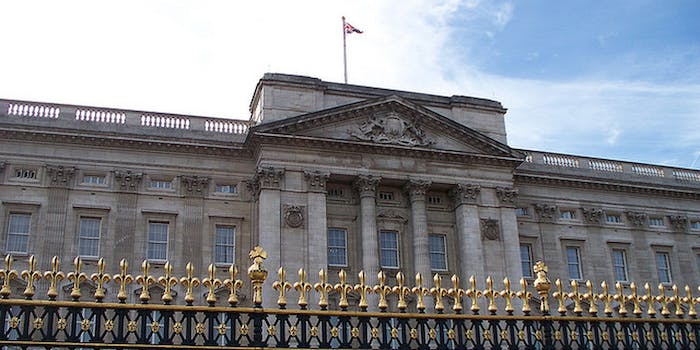 How did they film this ridiculous stunt?

If this video is to be believed, Buckingham Palace hosted a mysteriously nude visitor last week. One might even say he was buck-naked.

The video shows a naked man climbing out of a palace window and lowering himself down a rope made from bedsheets. Some tourists caught the crazy stunt on tape while filming the Changing of the Guard, an event so public that it makes the whole scenario very difficult to swallow.

There are a number of clues suggesting this video is a great big hoax. First of all, it would already be front page news in the U.K. if a man had fallen out of a window at Buckingham Palace, even if he wasn’t stark naked. Second, none of the spectators in the video are reacting in a realistic way.

The only people who notice what’s happening are the two women in the foreground, who are just mildly amused rather than freaking out—i.e., the natural response to seeing a naked man climbing out of any window. Despite the fact that Buckingham Palace is constantly mobbed with tourists, no one else seems to see what’s going on. It should be noted that the uploader, a Swedish man named Anders Dahlberg, only has one video on his YouTube page.

So even without going into any complicated analysis here, we’re going to call this video as a fake. It’s a good one, though.