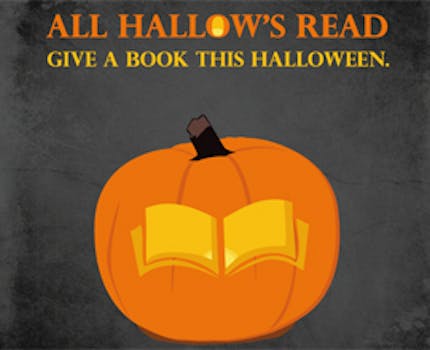 How Neil Gaiman “spreads the terror” with All Hallow’s Read

If Neil Gaiman has his way, kids won’t be the only ones getting treats this Halloween.

The celebrity author of Sandman and The Graveyard Book made a simple suggestion last year: Give someone a scary book for Halloween.

“Spread the terror,” he encourages amid a backdrop of a zombie-filled cemetery. The project’s website FAQ further advises that you “can fancy it up as much as you like. Just make sure you give someone a scary book this Hallowe’en…”

Fans and book-lovers have latched onto the concept. Scary book lists and more are popping up throughout the blogosphere, while writers taking are the opportunity to showcase their own spooky talents. On Twitter, the #AllHallowsRead hashtag is full of spine-tingling book recommendations and even fanart.

One book blogger, Ana Silva of Things Mean A Lot, got the idea to hold a blogger Secret Santa exchange based around All Hallows Read after a commenter suggested it last year. Er, make that Secret Goblin.

Silva and fellow book blogger Amy Rily decided to invite up to 20 other book bloggers to participate in the exchange. Although today is only the first day of the month-long celebration of spooky books, Silva told the Dot most of the slots for participants in her swap circle are already full, but that she wants to “[encourage] other bloggers to start their own swap circles”:

“Hopefully by … providing support to [the other participants], we’ll be able to make sure that the swaps remain small-scale and manageable for each host, but also that everyone who wants to participate will find a circle with available spots. We’re hoping this will be a fun way to bring bookish folks together, to share recommendations, and to help establish All Hallow’s Read as a Halloween tradition.”

The All Hallow’s Read is already moving in multiple directions. One gaming quest-based English class is offering students a chance to participate virtually. A group of authors have created a project called Fiction Frolic, with a goal of fundraising and donating 1,000 books for Books of America by Oct. 19, in honor of #AllHallowsRead.

And some people are letting the project change their lives: “After hearing @neilhimself inspire a teacher to do a month of #AllHallowsRead classes, I’ve decided to go back to school to teach HS English,” tweeted self-professed nerd Jenn Freeman earlier today.

Silva’s goals for her own project are much more modest. “What I’d like to accomplish by the end of the month is to spread the swap to any corner of the Internet where there are book lovers,” she said. “Nothing would make me happier than to see people take the idea and do whatever they want with it—if they add their own personal touch or find ways to improve it, even better.”

And what favorite spooky books and Internet memes will she be sharing this Hallow’s Eve? “It’s hard to pick just one, but I love Sarah Waters’ Fingersmith and Affinity for the wonderful Gothic atmosphere and for the gender commentary.

“As for creepypasta, I’ve always been partial to Smile Dog.”