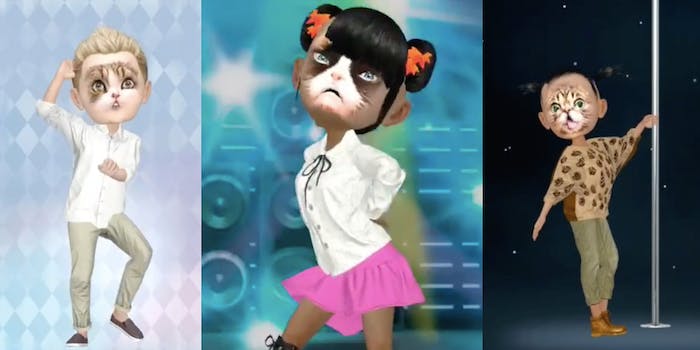 If you haven’t heard of the iPhone app MyIdol, you’ve probably been in a social media blackout.

The Chinese app, which has exploded across platforms like Facebook, Vine, and Instagram over the past few days, lets people create 3D avatars of themselves. Despite being entirely in Chinese, the app has found a Western audience, with people tapping around enough in the app to figure out how to make their animated characters dance, pose, and swing from the pole.

We at the Daily Dot decided to test the limits of the app by seeing how capable it was at digitally rendering some of the web’s most familiar furry faces. Like a modern-day Dr. Frankenstein, we began uploading pictures of Grumpy Cat, Lil Bub, and Maru into the app, trying to see what it would look like if these frisky felines broke out of their cages.

Be warned: The results are as terrifying as they are delightful.

Screengrab via The Daily Dot/Vine