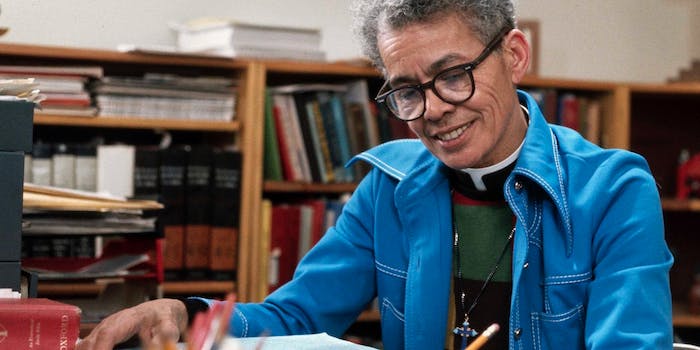 It's a fascinating looking into one person's life.

At one point in RBG, the 2018 crowdpleaser about the life of Supreme Court Justice Ruth Bader Ginsburg, the name Pauli Murray comes up briefly when Ginsburg listed Murray as a co-author of the first brief that Ginsburg filed to the Supreme Court. While Murray didn’t work on Reed v. Reed, which ruled that the 14th Amendment’s Equal Protection Clause protected discrimination based on gender, Ginsburg felt it was important to credit Murray (as well as Dorothy Kenyon, another co-author on the brief), whose arguments helped Ginsburg argue her case before the institution she would one day join.

My Name is Pauli Murray

RELEASE DATE: Oct. 1, 2021
DIRECTORS: Betsy West and Julie Cohen
STREAMING: Amazon Prime Video
A conventional but educational foray into the life of lawyer and activist Pauli Murray, who had a hand in shaping the arguments of some of the U.S.’s most important cases over the past several decades.

As My Name is Pauli Murray, directors Betsy West and Julie Cohen’s follow-up to RBG, reveals, Murray—the Black, queer, gender-nonconforming lawyer, professor, poet, and Episcopal priest at the center of the documentary—was a trailblazer, even though Murray isn’t a household name.

By giving us a view into Murray’s life and through their own words, West and Cohen argue that Murray absolutely should be talked about alongside both people like Ginsburg. “We literally live in an architecture of the world that Pauli Murray built,” Rutgers University professor Brittney Cooper, one of the film’s talking heads, tells her students.

When Murray died in 1985, they left behind 141 boxes of correspondence, journals, legal writings, hundreds of photographs, and dozens of hours of audio and videotapes, including recordings of Murray’s memoir. It’s a treasure trove of information and a window into the mind of someone who was at the forefront of equality and gender identity—oftentimes years or even decades before history would acknowledge those benchmarks—and became, in a way, an architect of the civil rights movement.

Murray would refuse to give up their seat on a segregated bus 15 years before Rosa Parks and would participate in a sit-in 17 years before the Woolworth sit-in (and won). A paper that Murray wrote in law school about how “separate but equal” was unconstitutional and violated the 13th and 14th Amendments would, 10 years later, be used in a Supreme Court case by Thurgood Marshall to overturn it in Brown v. Board of Education.

A single documentary couldn’t begin to capture the vast scope of Murray’s life, but My Name is Pauli Murray serves as a great primer for someone who might be unfamiliar with who Murray was. It doesn’t shy away from Murray’s complexities, their struggles with their gender identity, and how, later in life, their views would eventually be seen as outdated by some of their students. But the most important voice of all is Murray, who is, after decades of pulling the strings throughout much of the 20th century, is now in the spotlight. This time, they’ve got a captive audience.

My Name is Pauli Murray is available to stream on Amazon Prime Video.