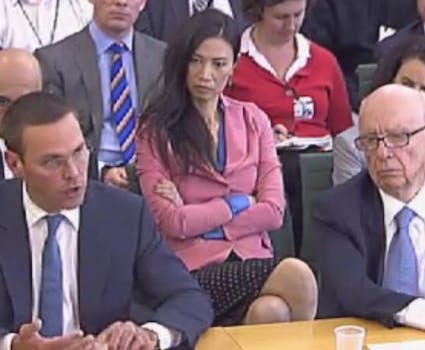 On Twitter, News Corp. boss comes off as a twit

Watching Rupert Murdoch testify to British Parliament is much more fun with Twitter.

Watching a major media mogul testify to British Parliament is much more fun with Twitter.

News Corp. chief Rupert Murdoch and James Murdoch, chairman of the company’s News International unit, are testifying in front of British Parliament this morning about their knowledge, or lack thereof, of the hacking scandal involving the now defunct News of the World newspaper.

Just like News Corp. employees, Twitter users, who are using the hashtag #hackgate, are watching the hearing with bated breath, scrutinizing every word and riffing on everything from the Murdoch’s accents to Rupert’s wife, Wendi Deng Murdoch.

Twitter’s attention to the hearing is captured by the trending topics. Worldwide, “Enron” is trending for a Member of Parliament comparing News Corp.’s behavior to Enron and “Murdoch Snr,” as an abbreviation to Rupert’s name. In the United States, former New York City Schools Chancellor Joel Klein is trending for his lack of blinking. (Klein is now leading News Corp.’s effort to clean up the phone hacking scandal.)

Many journalists and critics are live tweeting the events, also. Michael Wolff, a Murdoch biographer, is tweeting an acerbic commentary. He called today “A bit Day of the Locust like, crowds descending on Rupert.”

New York Times media writer Brian Stelter is sifting through and retweeting interesting nuggets about the hearing, including a tweet that Rupert makes more than $7,000 an hour, according to Zeke Turner of Women’s Wear Daily.

But not all tweets about the hearing are serious. Alex Pareene of Salon made fun of James Murdoch’s ever-changing accent. Another user noticed how, well, attractive James is.

Another looker that is receiving a lot of Twitter’s attention is Wendi, Rupert’s third wife. Belle De Jour wonders what made Wendi attracted to Rupert. Another Twitterer wondered what the deal was with Wendi’s pink jacket and icy glares.

Is it all too much? “Perhaps today is the greatest example of the media completely mis-estimating everyone else’s interest in the media biz. F*cking pathetic,” tweeted The_Analyst. A friend retorted, “this is media industry’s super bowl, hanging chads & beaver shots of Brittany [sic] Spears all rolled into one.”