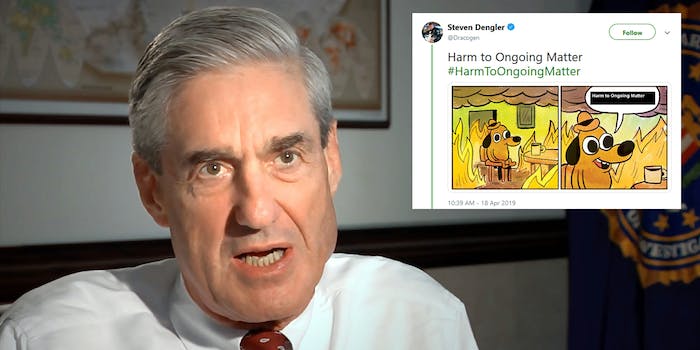 Everyone had a joke about the redactions.

The highly-anticipated Mueller report was released on Thursday, and as promised, there were redactions throughout it.

Attorney General William Barr explained ahead of making the report public that there would be certain criteria used to justify redactions, including “harm to ongoing matter,” information that is part of ongoing legal matters.

However, as millions of people flocked to read the Mueller Report, they couldn’t help but crack jokes about the sheer number of times “harm to ongoing matter” showed up in the more than 400-page document.

please nobody show radiohead this pic.twitter.com/G9VQR0Nkbs

All haters will now be referred to as a harm to an ongoing matter pic.twitter.com/e0S9XTVJvk

Some people repurposed other well known or recent memes:

Meanwhile, others thought of ways to use “harm to ongoing matter” in everyday life.

Turning in my next assignment like "sorry this is a harm to ongoing matter – me and my sanity." pic.twitter.com/KQqFO3b66c

GF: have you been drinking

Me: redacted due to harm to an ongoing matter

You can read more about the Muller Report—including the parts that weren’t redacted—here.