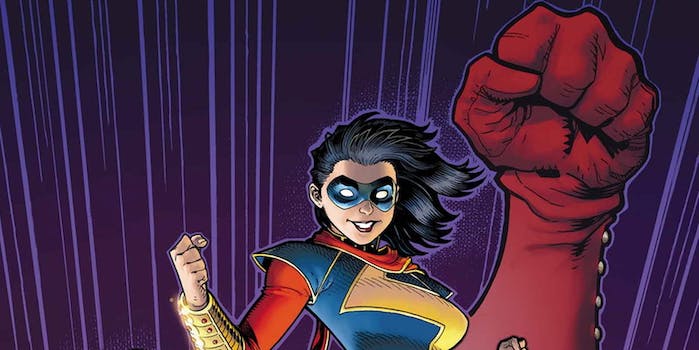 We know Kamala Khan is popular, but what does a sixth printing really mean?

Kamala Khan has enraptured the world as many times as she’s saved it. Now, the plucky Pakistani-American teen who made history as the new Ms Marvel, comics’ first ever lead Muslim superhero, is getting a rare sixth printing—and heralding a new era of diversity in comics.

Although the world of comics occupies an increasingly large part of the pop cultural domain—last year the industry did about $800 million in sales—the number of people who actually buy comics is relatively small. Most comics only average about 3,000 copies per printing; with Kamala now on her sixth printing, she’s headed towards a whopping 20,000 print copies sold.

Still, to put things in perspective, sixth printings are major milestones in the world of comics. Spider-Man Issue #583, the one with President Obama on the cover, only made it to a fifth printing despite making international headlines. Kamala now joins an elite lineup of bestselling comics that have performed beyond all expectations.

Many of these titles are genre classics and major issues in their respective franchises, including a number of prestigious Marvel titles:

On the DC side, there are familiar faces as well:

Image Comics also has a roster of best-selling titles to make the sixth-printing milestone, including the first issue of Matt Fraction’s The Sex Criminals and most issues of The Walking Dead. Other comics to get the lauded sixth printing include classics like Vertigo’s Absolute Sandman as well as acclaimed translated titles like Dark Horse’s Blacksad.

Of course, each of these comics feature men as the lead characters. Although female superheroes (and occasionally villains) have always been popular, they don’t see the kind of mass popularity that their male counterparts have. At NewKadia, which sells back-issue comics series, Wonder Woman currently clocks in at #20, coming in behind arguably less culturally iconic male superheroes like Thor and Daredevil. After Wonder Woman, only Lois Lane and Archie vintage sweethearts Betty and Veronica appear in the top 100 sellers under their own titles.

That Ms Marvel is getting a sixth printing speaks to the increasing diversity of comics fandom as well as the growing number of women and supporters of multi-cultural storylines who are entering the fold. The announcement comes on the heels of veteran anti-hero Harley Quinn getting a fifth printing of the first issue of her new series, as the second issue sells out on its second print run. Meanwhile, the popular Saga, known for its diverse character ensemble and strong female characters, has sold out and gone into at least one reprint for every issue; Issue  No. 1 is currently on its fifth printing.

Marvel has made little fanfare of the sixth printing, but then it doesn’t have to; Kamala has been a hot topic ever since her debut. And it’s no wonder, given that she’s basically a walking, squeeing fangirl meta-commentary on the franchise of which she is a part:

Hopefully, with nearly half of self-identified comic fans claiming to be women, there will be many more milestones like this one for Kamala and her sisters, and new introductions of other diverse superheroes, for all of us to enjoy.

Correction: We initially cited 20,000 print copies of Ms. Marvel sold. The first printing of issue No. 1 had a print distribution of more than 50,000 copies. Subsequent issues have garnered print distribution in comic stores (not measuring direct sales or including digital sales) of between 30,000-40,000 copies before going on to smaller additonal printings.