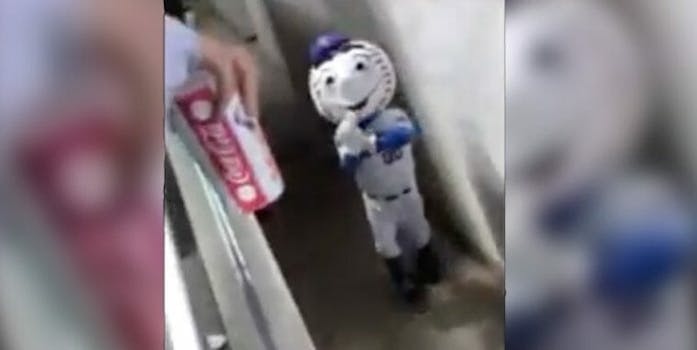 Mr. Met’s in trouble after video shows him giving fan the finger

The mascot was caught in the act.

One of the people who plays the baseball-headed New York Mets mascot Mr. Met was fired Thursday after a video of the mascot “giving the finger” to a fan surfaced online.

“We apologize for the inappropriate action of this employee,” the Mets said in a statement. “We do not condone this type of behavior. We are dealing with this matter internally.”

An anonymous Mets official later told the Associated Press that several people wear the Mr. Met suit, but the employee involved in this incident will never be Mr. Met again. He will, the New York Post reports, still have a job with the team.

The incident is yet another reminder that we now live in a voluntary surveillance state, where anyone could be filming anyone else at any time. This is especially true for public performers like Mr. Met, who appeared to be walking into the clubhouse when he delivered the finger. He may have thought he was safe, but he probably should have known better.

It’s also a reminder that the existence of the internet outrage machine forces companies and brands to apologize and cut ties quickly, even if no one’s really mad yet. The threat that a video could go viral and spark a witch hunt is enough.

In the pre-YouTube days, Mr. Met probably would have gotten off with a warning, if the fans bothered to report him at all.

The funniest thing Mr. Met has done in 50yrs. And he's getting canned. FYI he only has 4 fingers how do we know which is the middle. Lmao

In fact, some enterprising Mets fan seems to have made a parody Twitter account of the man who posted the video, Anthony De Lucia. “I am the coward who got Mr. Met fired,” the bio reads.

Others decided the punishment should have gone against the fan who posted the video, after they found his real Twitter account and dug up his old tweets.

Mr. Met deserves a raise for giving this guy the finger. pic.twitter.com/fSBImX5xr4