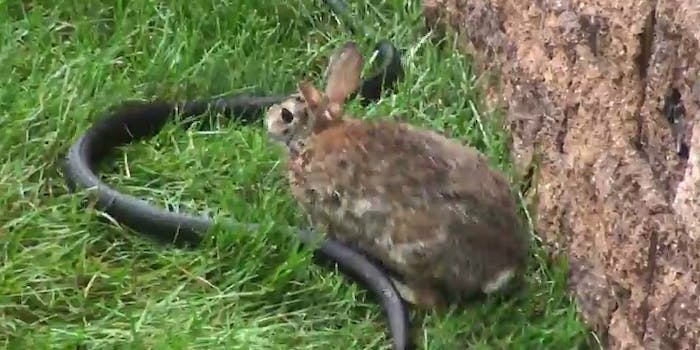 Nobody bullies this bunny.

If you were laying odds for a battle between a snake and a rabbit, you’d probably call the snake the heavy favorite—no matter the species of snake and no matter how big the bunny. I’d probably make the snake a 10-to-1 favorite even if I had never seen the contestants before the fisticuffs began.

If you agree with those odds, however, you would have lost a lot of money on this snake-vs.-rabbit face-off—because the rabbit is freakin’ fierce.

This is almost the definition of bullying behavior by the snake. It’s perfectly content handling Baby Rabbit, but as soon as Mama Rabbit arrives and stands up to the snake, the snake bully tries to get the hell away.

But Mama Rabbit isn’t having that. She continues to antagonize the snake, so much so that the snake tries to escape vertically up a stone wall. Finally, the reptile slithers away in defeat and humiliation.

It’s an awesome victory for what we considered a huge underdog.

As for the snake, it will certainly have trouble holding its head high from now on. Word travels fast, and soon all of the other neighborhood snakes will learn what happened.

As journalists, we’re supposed to be objective. But come on—look at this backflip. We’re on Team Rabbit.