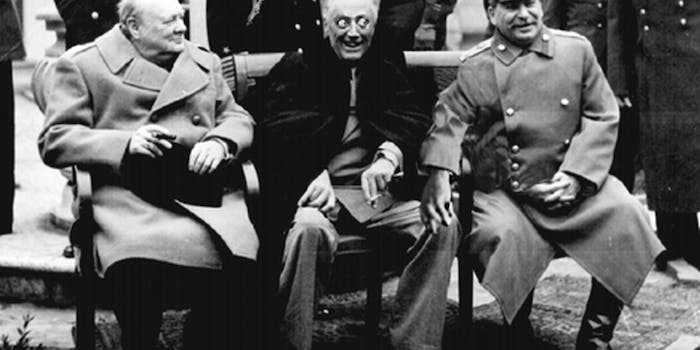 The Morning GIF: A touching moment from Yalta

When politics get frisky

Reach out and grope someone: We are the world; we are the feely.

You don’t want to see how the sausage of your politics are made. The Yalta Conference of February 1945 was one of the turning points of World War II, and according to today’s GIF, one of the creepiest moments of the middle century.

Roosevelt, Churchill, and Stalin put their heads together to try to find a solution to the seemingly unstoppable German assault. According to The Latin Library, Stalin and Roosevelt formed a particularly close bond at the previous Tehran Conference, and we can see here that the connection endured even unto the Yalta Conference.

Is this the start of a beautiful rom-com? Roosevelt sure seems to think so.