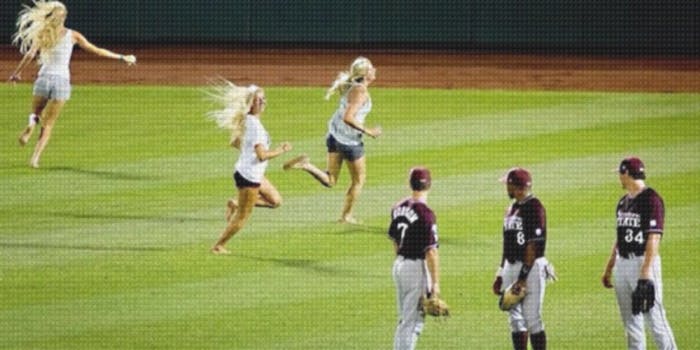 It will go down in history as one of the most expensive selfies in history.

It all started a week ago at the College World Series. Sisters Kayleigh, Emily, and Torrie Hill were in the stands pondering how they could make their baseball experience one they would never forget.

“If everyone chips in to the $1500 fine between me Emily and torrie, we will run on the field,” Kayleigh tweeted, according to Larry Brown Sports. “Guys I actually really wanna.”

During the sixth inning of the game between UCLA and Mississippi State, the sisters made good on their promise.

The Hills rushed the field while Kayleigh filmed the entire thing on Vine, Twitter’s video application, right up until the point where security personnel detained them. The video has since been removed from Twitter but the following GIF has been preserved.

Torrie, the youngest sister, was released by police because she was a minor, while Emily and Kayleigh ended up spending at least one night in jail, Fox Sports reported.

But meanwhile, they became Internet famous.

@mothafukaimhILL I don’t know if you’ve seen this or not but I just saw it on a random Instagram hahaha pic.twitter.com/1pxsIbqsyl

A girl rushed the field at the College World Series and took the best selfies ever while doing it: https://t.co/1gOjgwmKWu

Torrie tweeted she thought it was worth it, and Emily piped in that she hoped the guy who removed her from the field would follow her: “Shawty you was fiiiiiiine.”