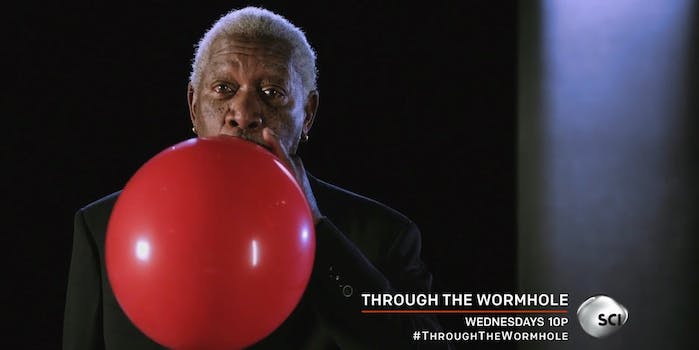 We still want him to narrate our lives.

Morgan Freeman’s voice is like a national treasure. So let’s give it some helium.

Many of us, at one time or another, have wanted the respected actor’s baritone, which has already narrated everything from Visa commercials and the CBS Evening News to a marriage equality ad and that documentary about penguins, to voice over aspects of our own dull lives.

Freeman is hosting and narrating Through the Wormhole on the Science Channel, and Entertainment Weekly previewed a 30-second clip about gravity, but it’s doubtful people are paying attention once he breaks out the helium balloon—for science.

We have no outside context for the clip or why he’s doing this in the first place other than as an example of the unexpected, but I’d like to personally shake the hand of whoever came up with the idea to give Freeman helium.