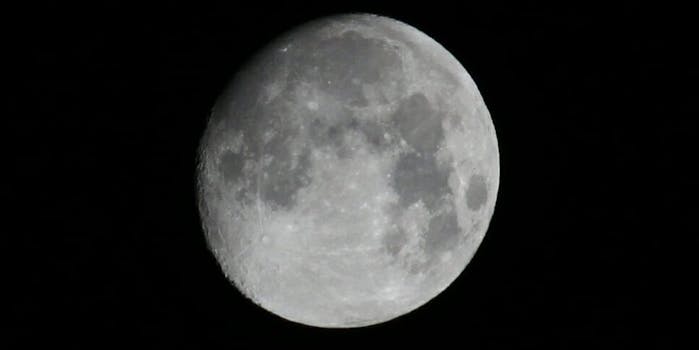 Astronomers’ research into moonmoons opens a world of memes

If moons can have moons, they might be called moonmoons.

It turns out that moons might be able to have moons of their own, and scientists are in the process of suggesting names for what those are called. One of the most popular suggestions so far is the simplest: moonmoon.

Gizmodo reports that astronomer Juna Kollmeier decided to research this topic after her daughter asked the simple question, “Can moons have moons?” Kollmeier, who works at the Carnegie Observatories in Pasadena, California, teamed up with Sean Raymond at the University of Bordeaux in France to find an answer.

None of our solar system’s planets have submoons, but it’s possible that our Earth’s moon may have had a submoon in the past, according to Kollmeier and Raymond’s paper.

The report has inspired a whole wave of “moonmoon” jokes on Twitter.

As many are pointing out, it’s not the first time moonmoon memes have been a thing, though in the past they had a different meaning.

“Moon Moon” memes originated last year when a Tumblr user Kitchiki posted a name generator called “Your Wolf Name?” According to the chart, if your initials are P.W., your wolf name would be “Moon Moon.”

“MY NAME, IS FRICKIN MOON MOON,” Kitchiki wrote. “I’D BE THE MOST IDIOTIC WOLF. ‘OH SHIT WHO BROUGHT FUCKING MOON MOON ALONG?’”

The post generated over 800,000 notes and tons of spinoffs.

So people were delighted to see the meme take on a new meaning when New Scientist posted this headline: “Moons can have moons and they are called moonmoons.”

LOL… The legend of Moon Moon for those who don't know. pic.twitter.com/MYW4bA92UZ

If you don’t already know the saga of Moon Moon, it’s pretty funny given this new information… pic.twitter.com/KiuaxGHN3u

Kollmeier and Raymond are probably wondering why so many people are posting weird wolf memes on their new scientific discovery. But people are really getting fired up about the moonmoon meme revival.

Sitting here reading MoonMoon memes to the point of tears, when I look up to see this across the street. pic.twitter.com/OGi3ypYx5o

Some are just wondering what a moonmoon’s moons would be called.

And Moomins, which are characters drawn by Finnish illustrator Tove Jansson, are also getting some attention in the moonmoon conversations.

Kollmeier said she has thought about the question of whether moons can have moons since 2014 but was inspired to research it after evidence of an exomoon appeared. Her paper hasn’t been peer reviewed by other scientists yet, so other findings could be yet to come.

In the meantime, here are more moonmoon memes.

PSA: If your day needs ridiculous brightness & cheer (& moonmoon isn’t doing it alone), click through for the glory of Moon Moon memes of goofy pups in the replies. pic.twitter.com/AOh1FhaCz7