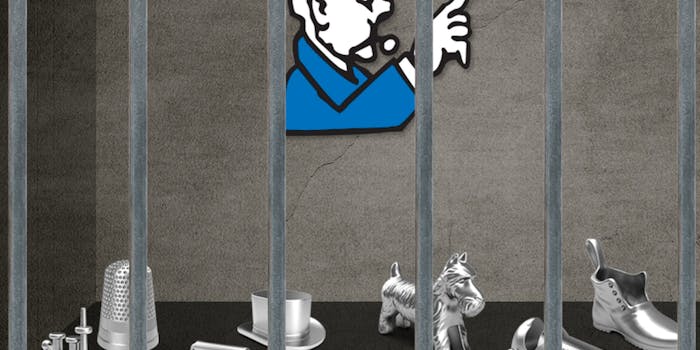 Monopoly boot may get the boot in Facebook token vote

In a Facebook app, users can vote to save their favorite pieces—and then for what to replace the loser with.

Toymaker Hasbro is getting rid of one Monopoly token for good, and they’re letting you decide which one.

The company announced via the Facebook page for its very popular board game that it was retiring one of its player tokens. Instead of announcing which piece was going to get the axe, Hasbro is holding a vote via a Facebook app, asking its users to vote to see which of the eight metal figurines—car, thimble, boot, Scottie dog, battleship, top hat, iron, and wheelbarrow—gets banished from ever landing on Boardwalk Avenue again.

“In an unlucky roll of the dice, every Monopoly token has landed in jail,” reads the Facebook app. “One will be locked up forever and replaced with a new piece.”

It’s not the first time a token has been retired from the set. A lantern and rocking horse were retired in the 1950s, and a locomotive is available only in deluxe editions.

Users can vote daily to save their favorite piece until Feb. 5, when the contest will close. Currently, the two items most in danger of being retired are the iron and the wheelbarrow, which have 6 and 4 percent of the total vote, respectively. The two tokens most likely to be saved? The Scottie dog and the car, which have obtained 33 and 15 percent of total votes.

Voters can also vote on which new token will replace the lowest vote-getter. Fans can pick between a robot—obviously the best choice—a ring, a cat, a helicopter, and a guitar, all of which you can view below.

The new token will be announced on Feb. 6.