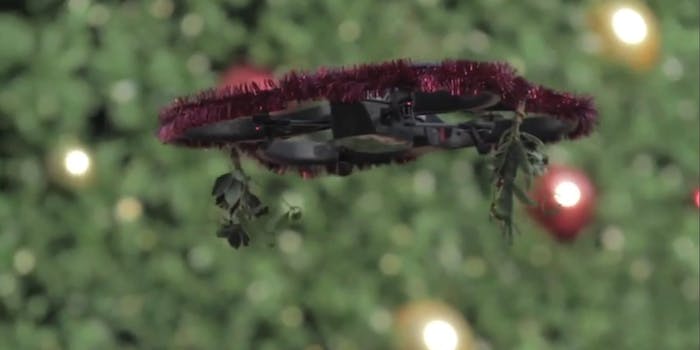 San Franciscans are smooching underneath this hovering mistletoe drone

Skynet is here, and it is very kissy.

The holidays are here, so it’s time to celebrate with ice-skating, Christmas trees, and war-robot-mandated partner-kissing.

A pair of San Francisco artists have successfully combined the most dehumanizing military development of a generation, flying drones, with that weird tradition that says that if you find mistletoe above your head, you must swap spit with whoever’s standing next to you.

George Zisiadis and Mustafa Khan then flew the sleek, tinseled monstrosity over San Francisco’s Union Square, and put the highlights on YouTube.

“Drones have been causing all sorts of paranoia lately and I wanted to reframe them from being something scary and ominous to being fun and human,” Zisiadis told the Bold Italic.

Provided you don’t find flying, faceless robot cupids scary or ominous, that is.