While Parkinson was out on the campaign trail last Monday, the following NSFW image appeared on his feed.

If you’re a member of a politician’s social media team, you basically have one job requirement: Not to tweet photos of giant erect penises from your boss’s account. Yet time and again, politicians’ social media employees, not to mention the politicians themselves, have had trouble adhering to that one rule.

The latest example: whoever manages the Twitter account of Missouri State Rep. Mark Parkinson, who accidentally tweeted a photo of a giant erect penis earlier this week.

While Parkinson was out on the campaign trail last Monday, the following image appeared on his feed (NSFW, obviously, unless your boss happens to be a big fan of boner jokes): 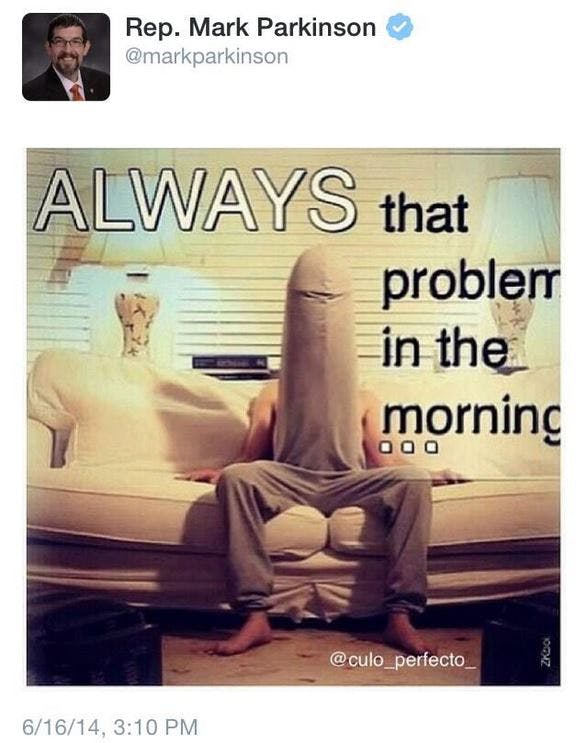 Although the tweet was quickly scrubbed from Parkinson’s account, a local journalist managed to get a screengrab, prompting an extremely contrite Parkinson (who normally tweets almost exclusively about his Fitbit data) to issue an apology. Parkinson claimed that he couldn’t have sent the tweet because he was not near his computer at the time, and that his account had been hacked.

Obviously, I need to change my twitter password. Random pics and tweets are being sent that I have never seen before. Apologies!

@Schweitzer88 @eyokley I’m out walking doors…I have no idea where those tweets are originating from.

@eseider yes, it was somehow compromised. I’m out walking doors and nowhere near my computer!

Of course, the fact that Parkinson was nowhere near his computer at the time doesn’t mean anything—he could easily have used a smartphone. But if we take him at his word, let this incident serve as a reminder to all state politicos’ social media interns: Assuming your boss is not running on a pro-morning-erection platform, it’s probably a good idea to change his freaking Twitter password every once in a while.