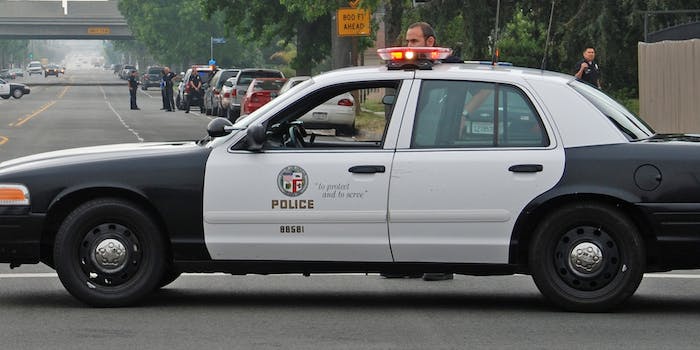 There is a way that being unfair to young black men will get a white Missouri cop in trouble: Facebook.

There is a way that being unfair to young black men will get a white Missouri cop in trouble.

He attracted controversy for unsavory posts of Brown. In reference to the ongoing protests in Ferguson, Catron submitted an image macro of O.J. Simpson, accompanied by the text “Remember how white people rioted after OJ’s acquittal? Me neither.” Posting an image of a young black man posing with Hawaiian Punch and New Amsterdam gin while holding money in his mouth and pointing a gun at the camera, Catron wrote “I’m sure young Michael Brown is innocent and just misunderstood. I’m sure he is a pillar of the Ferguson community.” 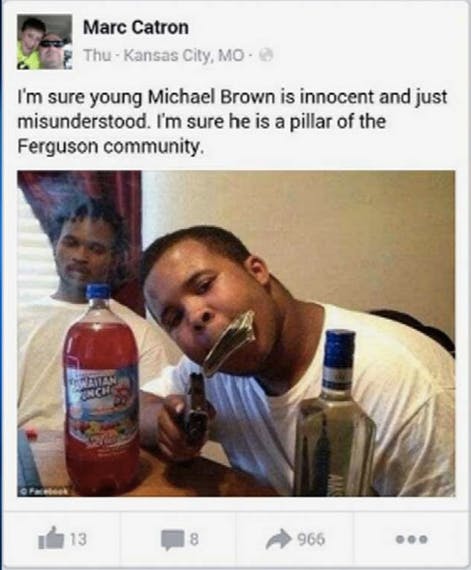 The problem with that later statement, in addition to the obvious, is that the man in that photo isn’t Brown. It’s Jodah Cain, a 17-year-old who stands accused of murdering his grandmother in Oregon last year.

One administrator at the KCPD who identified herself as media relations immediately transferred the Daily Dot to voicemail when asked about Catron. But they did tell local news station KCTV5, which broke the story, that the department’s social media policy prohibited “statements or other forms of speech that ridicule, malign, disparage, or otherwise express bias against any race.”

Brown’s autopsy report shows that the final time he was shot by officer Darren Wilson, the bullet entered the top of his skull, indicating he was already either beginning to kneel, as witness accounts indicate, or he was already lying on the ground.