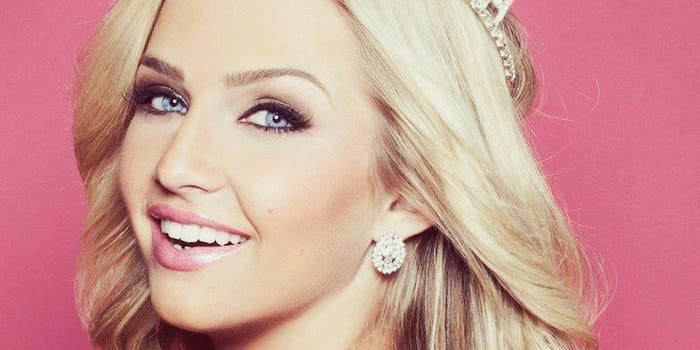 California’s Cassidy Wolf, 19, first reported the hacking to the feds several months before she was crowned Aug. 10.

The recently crowned  Miss Teen USA is at the center of federal investigation after cyberstalker allegedly hacked her webcam and threatened her with “sextortion.”

California’s Cassidy Wolf, 19, first reported the hacking to the feds several months before she was crowned Aug. 10. She’s been using her experience to launch a cybercrime awareness campaign. She claims she was alone in her bedroom when the anonymous hacker accessed her webcam. The hacker, one of a growing legion of webcam spies, threatened to publicly release snapshots taken of Wolf in her bedroom through the webcam.

Wolf told Today that she “was just a normal girl in high school” when the incident took place. In a Facebook post allegedly written after the incident, she described herself as “hysterical” once she realized what had happened:

The person gave me 3 options (extortion) in return for my accounts back… I continued to scroll through the lengthy email and saw at the very end of the email he had attached multiple pictures of me changing in my room. By this point, I was hysterical, scared, violated & had NO IDEA what to do. This person had control over all my accounts and was threatening to post pictures of me changing onto my social media accounts.

As part of her campaign to help others understand how easy it is to become a cybercrime victim, Wolf recommends a few easy safeguards: regularly changing passwords, deleting cookies and browser history, and covering the webcam when not in use.

Internet-related crime is on the rise. Earlier this week, Daniel Perry, 17, committed suicide after hackers threatened to share a recording of a Skype conversation he had with a girl.

It’s frighteningly easy for a stranger to access your webcam, simply by using Remote Administration Tools (RAT). In January, Facebook announced it had squelched “a peeping Tom bug” that would have allowed hackers to use the webcams of unsuspecting Facebook subscribers to record and post videos on their behalf. Most Internet users simply aren’t prepared for the reality of how easy it is to look in on their lives.

Wolf certainly wasn’t. When the Hairpin asked if she worried about the anonymous attention her heightened fame could bring, Wolf equivated: