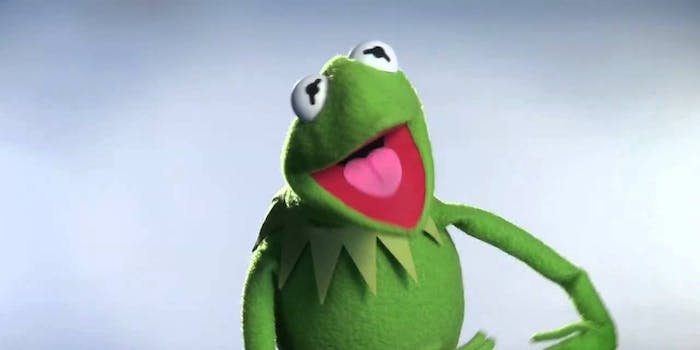 The Miss Piggy-Kermit breakup us turning into a misogynistic, slut-shaming nightmare.

The manufactured PR surrounding ABC’s upcoming reboot of the Muppets’ classic TV series seemingly couldn’t have gotten more bizarre and out of left field, but it’s a slow news day on a Wednesday afternoon and here we are. Nearly a month after Miss Piggy and Kermit announced their own “conscious uncoupling,” People magazine “broke” the story that America’s favorite neurotic frog found himself in the arms of another sow: Denise.

If you note the quotes in the previous paragraph, it’s because this is a fictional story about fictional relationships with fictional characters. Despite Kermit’s insistence that the two are not involved—because they are, I repeat, not real—Denise has been getting liberally slut-shamed on the Internet, with Twitter users calling her a “homewrecker.” The word is often used to describe women—and almost never men—who are the third party in a relationship, placing the burden of responsibility on them for ruining what was otherwise a stable home, right? (Hint: It wasn’t.) As Madame Noire’s Brande Victorian notes, it’s a “double standard placed on women’s sexuality.”

Should you be looking for someone to blame, don’t point the finger at Denise. You should really be mad at ABC, who knew exactly what it was doing in pairing Kermit up with a busty new partner. Miss Piggy and Kermit are one of the most beloved couples in pop culture history, and fans were already going to be upset about the prospect that their love might not last forever. Into that mix, the producers behind The Muppets threw a love interest who, depending on your opinion, looks like either Game of Thrones’ Natalie Dormer or Kim Kardashian—the most irrationally disliked woman in America. Denise might as well be Jessica Rabbit sucking a popsicle.

Kermit’s new girlfriend was clearly designed for Internet hate, and if that isn’t outright trolling, what is? The pairing exploits the worst slut-shaming and misogynistic tendencies on the Web—all for the sake of ratings. Some of it feels tongue-in-cheek and in good fun. In a response to the “story,” an anonymous blogger—who is definitely not Miss Piggy—at Jezebel responded, “I would like to know the f**k she thinks she is. I’ve never met this pig, but I can tell she’s the absolute, honest-to-Henson worst.” The commenter also calls out her “overdone smokey eyes” and “that $2 merkin of a wig.”

Kermit’s new girlfriend was clearly designed for Internet hate, and if that isn’t outright trolling, what is?

As far as shade goes, it’s pretty solid, but it’s also ruining what was otherwise a sneakily empowering development in Miss Piggy’s arc. Last month, I argued that the Piggy-Kermit split was long overdue—giving producers greater time to focus on Miss Piggy’s career as an actress, rather than insisting that her love life was the only storyline that mattered. “After all, Miss Piggy is the only major female character in the Muppet clan, and she’s the only one who has been defined by her relationship,” I wrote at the time. “Does Fozzie have a love life? Who is Gonzo fucking this week? What happens between Statler and Waldorf behind closed doors?”

Since the split, Miss Piggy has been “caught getting cozy” with heartthrobs like Liam Hemsworth and Tom Hiddleston. It’s silly PR, but it’s silly PR with a good message—precisely because of the lack of judgment in Piggy being seen as a woman about town. Because she’s not a real human woman, she can be attached to as many A-listers as she likes without being concern-trolled in the tabloids for her “wild ways.” She’ll never be Kristen Stewart, who couldn’t leave her apartment because of the death threats she received after cheating on Robert Pattinson, or Kaitlyn Bristowe, who was branded the “slutty Bachelorette” for sleeping with male contestants on her own dating show.

And as an anointed feminist icon—receiving an award from the Elizabeth A. Sackler center last year—Miss Piggy’s impact matters. Precisely because she isn’t real, she doesn’t have to play by the same rules; thus, she makes it easier for non-plush women not only to be defined by their relationships but also to navigate them on their own terms. Hearteningly, Miss Piggy’s own Twitter account has stayed basically silent on the matter, highlighting her busy schedule and many accomplishments. “Am I worried about being the first woman in late night TV?” Piggy tweeted this week. “Absolutely not! I’ve always been a trend setter, you know. Move over, boys!!”

Like Piggy, ABC has the opportunity to be trailblazers—simply by not allowing the storyline between its only two female characters devolve into nothing but a catfight over a man. Piggy often had antagonistic relationships with the female guests on The Muppet Show and Muppets Tonight, but there was a crucial distinction—they were driven by her ambition, not out of petty tabloid fodder. When Michelle Pfeiffer dropped by Muppets Tonight, Piggy and Pfeiffer compete for the part of Maria Von Trapp, as well as arguing over who is the “guest star” of the episode. (According to Miss Piggy, she’s the guest star every week.) However, the two bury their brief feud by the end of the episode, engaging in a karate chop of female solidarity.

Thus, if ABC wants to do right by Miss Piggy—and the millions of fans who have been looking up to her for decades—they have a responsibility to ensure that this storyline doesn’t turn into a regressive, sexist nightmare. It’s very reminiscent of actress Amy Adams’ fears about Wonder Woman being introduced into Batman V Superman: Dawn of Justice. In an interview with Coming Soon, Adams—the current Lois Lane—said that she hoped their relationship wouldn’t turn into a “love triangle” with Superman: “Maybe… we team up together and we work as teammates instead of adversaries.”

While Denise is clearly being set up as competition for Miss Piggy, that doesn’t have to be the case. People “reports” that the character is a marketing executive at ABC, meaning that she and Piggy have a lot in common. They’re both professional women who have achieved a lot to get to where they are—whether it’s in showbiz or climbing the corporate ladder. Instead of being rivals, what if they became friends? After years of showing that an outspoken, independent woman could handle herself—including saving her boyfriend from imminent death—why doesn’t Jim Henson’s company show Miss Piggy supporting other powerful women?

Female solidarity might not stir up easy clickbait by generating Internet hate, but if we’re going to have a fake love triangle featuring fake lovers, we need to remember that the outcome has real consequences.