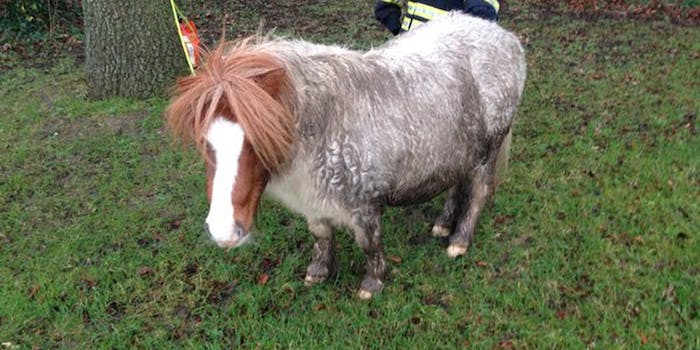 Sadly, his dreams of independence were dashed.

Then on Monday’s premiere of The Bachelor, one hopeful woman arrived with her pet pony in tow.

The MVP of The Bachelor was the mini horse a girl brought that didn't know it was on TV: https://t.co/AydZYTdzD9 pic.twitter.com/xyKbwtepNQ

But no reality-TV plotline can match the real life drama that went down across the pond in Trowbridge, England, when a miniature horse named Harvey learned how to open the gate of his paddock.

It appears Harvey had smarts, but he also had big plans. Upon opening the gate, Harvey ran away from home and attempted to make a new one for himself at the local fire department.

When Trowbridge firefighters discovered Harvey in the fire station’s yard on Monday morning, they took to Twitter to investigate.

Ok loads of RTs needed. Just shown up to work and there is a pony in the yard. Who's is it!!?? pic.twitter.com/sS7AZajtgl

Harvey was safely returned to his home, which is just up the road from the fire station. But we’ve got to say, we’re a little disappointed that he wasn’t allowed to pursue his dreams.

Keep fighting the good fight, Harvey. We have a feeling your day is coming.