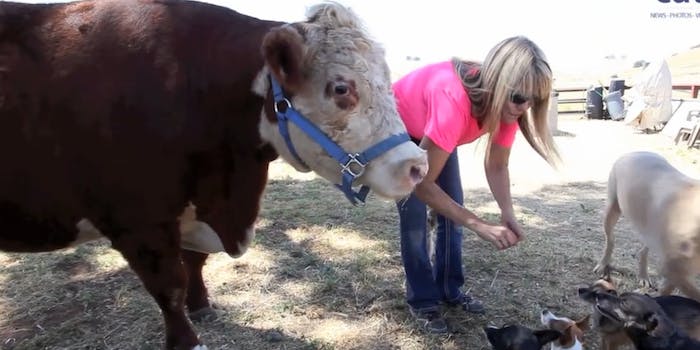 Meet Milkshake, the 1,200-pound cow who thinks she’s a dog

Here's lookin' at you, cud.

What is it we find so endearing about animals with confused identities? Perhaps they address some existential worry of our own—and prove that there’s really no such thing as “normal.”

In any case, you’ll definitely want to get acquainted with Milkshake, a 1,200-pound cow who thinks of herself as a dog. Rescued several years ago from an abusive owner who didn’t even let her graze, she now roams freely with the canine pack at the Grace Foundation, a nonprofit facility in northern California. She’s particularly dedicated to her human, rancher Beth DiCaprio.

But Milkshake isn’t without her foibles, including an unfair grudge against another ranch employee.

Even so, it’s hard not to love a heifer who gives her little Yorkie friend piggyback rides.

Let this be a lesson to zoology-fixated children everywhere: You can grow up to be whatever species you want.

Correction: A very early version of this story misstated Milkshake’s weight in the headline.