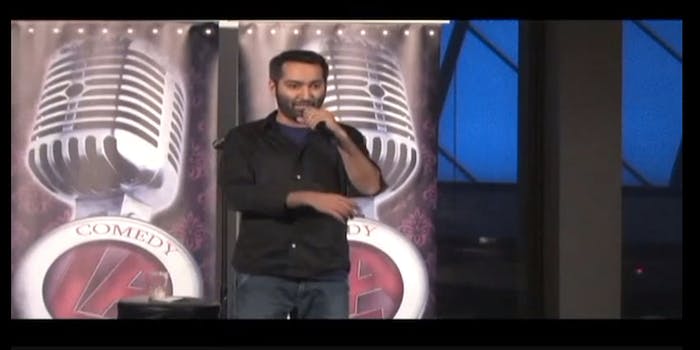 This Indian-American comedian deserves a medal for handling military heckler

This audience member didn't see the next joke coming.

Even a positive heckler is a disruption at a comedy show, but when an audience member threatens your life, that’s taking it to a whole other level.

Indian-American comedian Deepak Sethi asked at a recent show in Las Vegas whether anyone in the audience was in the military. One enthusiastic man said he was and then added, “We’re coming for you.”

A video of the encounter made the rounds on Reddit and has racked up more than 267,000 views on YouTube.

Sethi immediately abandoned his set and put on a master class in verbally disarming even the toughest heckler.

Then he broke down laughing, and the audience loved it.

“What do they teach you in recruiting? Okay, any time you see a brown guy anywhere, you just fucking yell threats at them,” he improvises. “Yeah, fuck you Indian guy!”

He then reveals that the reason he asked if anyone was in the military was to thank them for protecting him from “people who look like me.” The military heckler sheepishly replied, “My bad.”

In a followup on Reddit, Sethi explained that the guy was a military veteran and that they talked after the show and set everything right.

“He was with his wife who was super embarrassed. I got them free comps to future shows for being a good sport. Like someone else mentioned, this was the friendliest heckle ever! I really don’t think he was trying to be racist,” Sethi wrote.

Reddit, for its part, is loving the comic. Most commenters have been very supportive of his response to the heckle .and even those in the service have admitted they were pleasantly surprised by the whole exchange.

This story could have had an unfortunate ending, but instead, everyone wins.