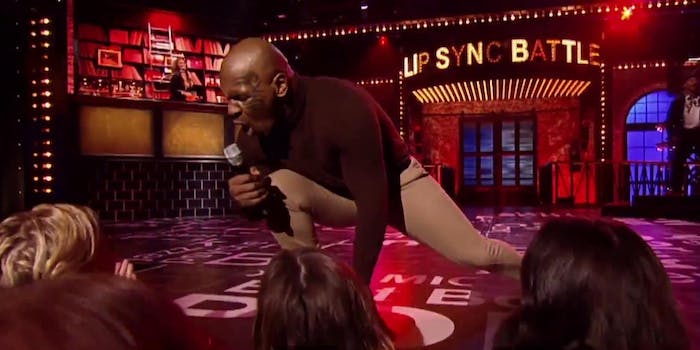 Last night, Mike Tyson went up against Terry Crews on Spike TV’s Lip Sync Battle. His performance of The Rolling Stones’s Satisfaction was so enthusiastic and so darn likable, that it actually managed to make me forget that he once bit part of another man’s ear off:

Not only did Tyson’s performance win my heart, but it also won the award for Tightest Pants of 2015 (thus far). I’m fairly sure those are just tan yoga pants with pleats somehow added to them.

Tyson’s performance was followed up by Terry Crews’s take on Run-DMC’s “Sucker MC’s.” But there was nothing surprising about how awesome that was, because it’s a law of nature that Terry Crews is always awesome.