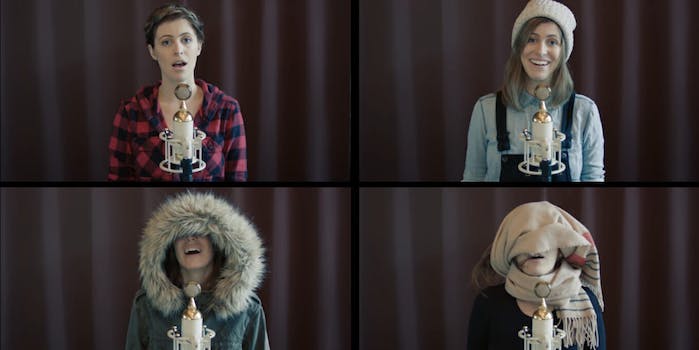 It all started with a goofy video of comedian Miel Bredouw singing Three 6 Mafia’s “Slob on my Knob” to the tune of Christmas classic “Carol of the Bells.”

The comedian posted the short video in late 2016. In it, she notes how well the beat of “Slob on my Knob” works with the “Carol of the Bells” tune, before launching into a short demonstration. But in a series of tweets from late Monday, Bredouw broke down how the people behind Barstool Sports, a sports and pop culture blog, attempted to take possession of her content and extort her.

She thinks she knows why.

She began her Twitter thread with a bit of background.

“In December, they (Barstool Sports) reuploaded one of my videos without credit. I asked for credit, was ignored, and filed a DMCA takedown,” Bredouw wrote on Twitter. “Twitter quickly took it down and IMMEDIATELY Barstool’s social guy sends me an email, I don’t respond. He emails again in early February. I don’t respond.”

In December, they reuploaded one of my videos without credit. I asked for credit, was ignored, and filed a DMCA takedown. Twitter quickly took it down and IMMEDIATELY Barstool's social guy sends me an email. I don't respond. He emails again in early February. I don't respond. pic.twitter.com/GYLYOnHFXq

Bredouw went on to describe months of emails, Facebook messages, Twitter DMs, and messages on Instagram. The people over at Barstool Sports allegedly provided her with increasingly tempting offers to “simply lie and retract my fact-based DMCA report.” Bredouw referred to the company, who she claims sent her hundreds of messages, as “a historically racist and sexist company.”

(The site’s content has been attacked on social media for being sexist and its CEO has become a controversial leader for his brash online persona. An ESPN deal with Barstool was quickly scrapped because of Barstool’s crude content.)

Then the full on harassment begins. I didn't screenshot all the messages before deleting but across my IG, my twitter, my email, my PODCAST'S INSTAGRAM, TWITTER, AND EMAIL they send me these messages. Hundreds. I block them. They find me again. Still, I don't respond. pic.twitter.com/bpPEtNupBJ

According to screenshots shared by Bredouw, Barstool offered her gift cards, promotion opportunities, and gradually increasing sums of money to “resolve” the issue. “I keep blocking their accounts and they keep finding me,” Bredouw wrote. “I turn off all DM’s. They offer me $500. I don’t respond.” After a few weeks of silence, she thought they’d finally given up.

I honestly thought it was finally over after two weeks of silence. Until this morning, I get another email from legal guy now offering me $2000. Which I would never take (10000% fuck barstool sports) but EVEN IF I wanted to… extortion? Like in what world. pic.twitter.com/s561QpZBPX

A final offer of $2,000 reportedly came after the weeks of silence. In a message, Barstool Sports legal council Mark Marin told Bredouw “we are willing to pay you $2000 if you will retract the DMCA Notice.” Again, she says she ignored this request.

Within hours, according to her account, Twitter reached out about a DMCA counter-notice filed by Barstool Sports. “We will cease disabling access to the materials within 10 business days, unless we first receive notice from you that you have filed an action seeking a court order to restrain the subscriber from engaging in infringing activity relating to the material posted on an identified Twitter account,” Twitter reportedly wrote.

Thank you for assuming I must have ONE HELL OF A video but the likely truth is a much bigger bummer: if they get too many DMCA copyright strikes, Twitter has to legally delete their account. I believe they get six. How much you want to bet mine was their fifth?

Twitter included the counter-notice from Barstool Sports in which Marin believes “this material was removed as a result of an error.” He said the user who sent the video “claimed to have full rights to license and assign the content to us to post on our account.” After noting that they reached out to Bredouw multiple times, Marin wrote: “I swear under penalty of perjury that I have a good faith belief that the material was removed or disable (sic) as a result of a mistake or misidentification of the material to be removed or disabled.”

Bredouw thinks that the most likely reason for Barstool Sports’ dogged pursuit of a retraction of the DMCA notice is that after too many strikes it has to legally delete its Twitter.

In an interview with the Daily Dot, Bredouw said commenters have been criticizing her for refusing to respond to Barstool. “If a company with deep pockets and no moral integrity wants your content, they can easily bully you into submission,” she said. “They wanted the DMCA strike gone and they abused the system to make it so.”

Twitter’s copyright policy states that “a counter-notice is a request for Twitter to reinstate the removed material, and it has legal consequences.” It makes it clear that other options are available, but that a counter-notice is legally out of Twitter’s bounds. “If multiple copyright complaints are received Twitter may lock accounts or take other actions to warn repeat violators,” it reads.

Bredouw said she intends to pursue legal action to protect her content. Twitter’s response to the situation was disappointing for Bredouw—if not surprising, she said.

“Seems like they will go to great lengths to not get involved,” she said. “But their policy ultimately results in companies threatening creators into submission.” She called Twitter’s lack of human customer service when it comes to DMCA claims “irresponsible at best.”

Barstool Sports did not respond to a request for comment, but David Portnoy, the founder of Barstool, wrote a blog post addressing the controversy. The blog post is titled “It Takes a Big Man With Huge Balls To Say We Fucked Up – Today I Am That Big Man.” In it, he claims that Brewouw is “making this seem far more sinister than it was,” and “Miel never once notified us that we had illegally posted her video.”

According to Bredouw, she notified them immediately, before filing the DMCA request.