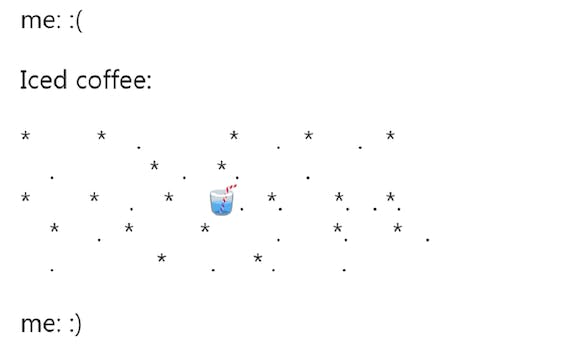 Everyone’s mood is going from :( to :) in this latest meme

It's all about that sparkle.

As a text-based platform, Twitter’s always been a hotbed for ASCII art, but this month it seems like its users have gone into overdrive. First people started serving the tea in images of tea. Then last year’s bunnies came back buffer than ever, not to ask if  “u want this” or broadcast hot takes on signs but to protect a very smol bun.

Now users are spicing up a boring old textual meme with literal sparkles —along with every emoji under the sun.

Earlier this month, users began posting the same formula on Twitter without all the flare, detailing how their favorite song lyrics, pets, or movies perked them up. Most of the time, remembering a celebrity or loved one simply existed was enough to turn that frown upside-down.

While a few Twitter users began being extra af with the format early last week, it took a call out to all astrology lovers for the meme to really pick up steam.

Many users intersperse the ASCII sparkles with names of their favorite fictional character or celebrity, while others showcase song lyrics they adore.

But of course, Twitter memes can never be contained in one formula. They mutate and branch off into endless variations, taking on a life of their own. Recently, users have begun building elaborate scenery between their mood shifts.

Does this mean all of Twitter’s text memes are going to be blessed with ASCII art iterations? One can only hope.