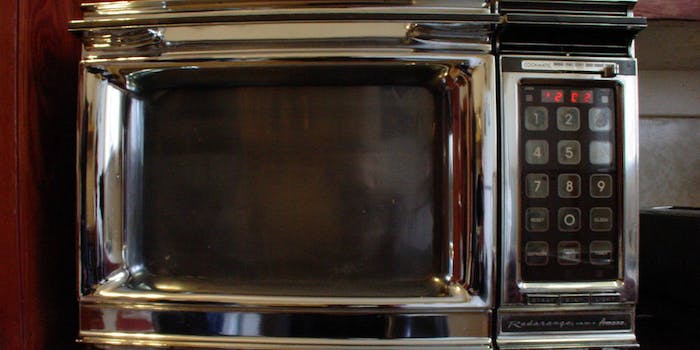 At least no one scrambled fighter jets.

It’s as though Monty Python wrote a scene for Contact.

Researchers with Australia’s national science agency, scanning the skies in search of extraterrestrial life from a radio telescope facility in New South Wales town of Parkes, were shocked to learn that their kitchen microwave can emit impressions that resemble the very same intergalactic signals they’ve been looking for. This coincidence led them to believe that they may have intercepted a non-human communication.

Talk about your confirmation bias.

The scientific term for these signals is “fast radio burst.” If intelligent life were trying to communicate with Earth, its radio signals would stand out amongst the general galactic noise as intentional bursts that could be more easily detected. Eleven such signals have been found to date, and though theories abound, their origin is ultimately unknown. Except in this case.

PhD student Emily Petroff, among those facilitating the search for extraterrestrial intelligence at the dish, said that someone had opened the kitchen microwave before it was finished cooking a food item—probably popcorn, which aliens find irresistible. It emitted a promising radio burst, and this of course registered as being very close to home.

“Help!” the scientists probably screamed. “The invasion is coming from inside the lab!” Man, that must have been hilarious.