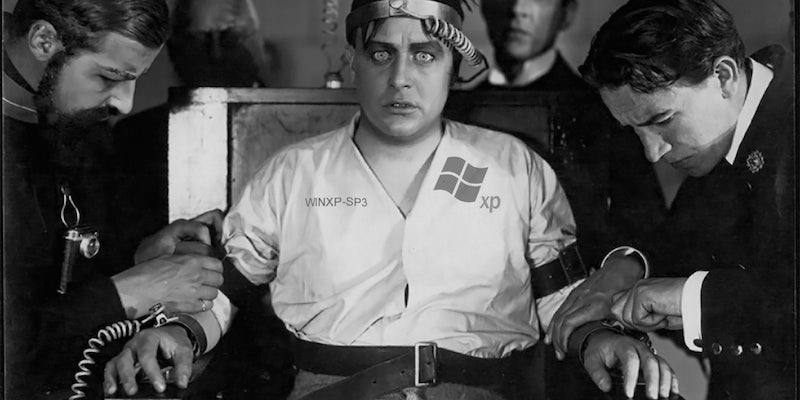 Why killing Windows XP would put us all at risk

The storied Microsoft OS Windows XP will stop receiving Security Essentials updates on July 14, 2015, and it could a huge ripple effect.

Your grandma, your employer, or both are potentially about to be very, very confused.

The storied Microsoft OS Windows XP stop receiving support and security updates on April 8. (Update: The company will continue to provide updates to its “antimalware signatures and engine for Windows XP users through July 14, 2015.) That’s is the official death knell for the operating system that controls an estimated 28 percent of online computers, a staggering number considering Microsoft has unveiled not one, not two, but three different operating systems since XP’s unveiling in 2001 (although “operating” is a generous term for Vista).

XP plays an important role in the story of Microsoft. With its for-the-time sleek graphics and user-friendly experience, it brought the software giant into the broadband future, a technology environment where iPods were just beginning to become toys only for high-end hipsters. It’s likely the first OS you used to visit Myspace, Reddit, and other ageing relics of the Web 2.0 era.

And that’s precisely why Microsoft is sending XP to a farm upstate. PCs (and the Internet at large) have far surpassed the limitations of computers that came with XP. The only people still using it are either stubborn, penny-pinching offices, or people too afraid of change to move on to the overly confusing Windows 8. Continuing to issue updates for XP is costing Microsoft money it’d prefer to spend on trying to get you on a Windows phone.

However, XP’s extremely long shelf-life means denying security updates to these dinosaurs is putting millions—if not billions-—of us at risk. Although the Microsoft Security Essentials package is an admittedly “bare-bones” anti-virus, it’s often the only updated security software on older computers that haven’t seen maintenance in years. That means the tens of millions of PCs running XP will be considerably more vulnerable to attack after April 8.

What’s more, XP has found itself in some surprisingly important places: 95 percent of all ATMs use Windows XP. The death of XP means nearly every ATM you or anyone else you know has ever used will need personally updated by a technician, be it the unit in Chase Manhattan’s headquarters or the grey beast at your local flea market that plays a MIDI “We’re In The Money” when it disperses your cash. Bancorp—the fifth-largest ATM network in the world—has only updated 15 percent of its more than 5,000 units to Windows 7. Banking giant JP Morgan (which controls 19,000 of the U.S.’s 420,000 ATMs) hasn’t even started that process, instead paying Microsoft for personal updates.

Banks aren’t the only holders of U.S. debt with this problem. China is asking Microsoft to continue updates out of fear for its own ageing digital marketplace. XP makes up a whopping 50 percent market share of online computers in China, with Windows 7 coming in second with 40 percent. Software piracy is a major concern for Beijing, and forcing nearly all of China’s digital consumers into an expensive Windows 8 model will likely only result in more.

Of course, forcing consumers into new technology is fair game in Silicon Valley—it’s basically Apple’s entire business model. And Microsoft isn’t the only one desperately wishing for XP to die a quiet death. Both HP and Dell—the top desktop and laptop manufacturers in the U.S.—are heavily invested Windows 8 and even its predecessor Windows 7. Making XP too vulnerable for businesses or consumers means more bulk and individual orders of new PCs, a market that has seen a slow but certain decline since the rise of smartphones.

Yet, that’s a hole Microsoft has most certainly dug for itself. The horror stories of early buyers onto XP-sequel Windows Vista made many consumers wary of upgrading at all, sparking a rise of “down-dating” services that will revert your Vista system back to trustworthy XP. Whereas Apple updates its desktop OS often with small, more digestible changes, Windows bets big (and often loses). Windows 8 is perhaps the most stark change to PC computers ever, forcing entire generations raised on taskbar, desktop-centered user interfaces onto a clunky touchscreen-based experience (and one that looks like a Piet Mondrian painting at that). By forcing drastic change—often with mixed results—Microsoft endows its users with the need to rely on older systems. After all, Apple doesn’t have to provide support for any OS released before 2009, not 2001.

The stakes at play are certainly huge. Billions of PCs will be at risk and not just those running XP. Whereas Microsoft likely feels it’s given the market more than enough time—including a superb OS in Windows 7—to abandon the jurassic XP, the reality could not be farther. And consumers aren’t to blame: This is a side-effect of Microsoft’s notorious relationship with their users: forcing customers into expensive software, awfully blind tech support, the goddamn “Ribbon” in newer versions of Word.

Microsoft is apparently tone-deaf, and now it’s paying the price. However, if these rather arbitrary deadline sticks, Microsoft’s insolence could likely cost us all.

Update: This article has been updated to clarify the distinction between Microsoft’s end-of-support date for Windows XP and the updates that will be provided to the company’s antimalware signatures and engine for XP users.