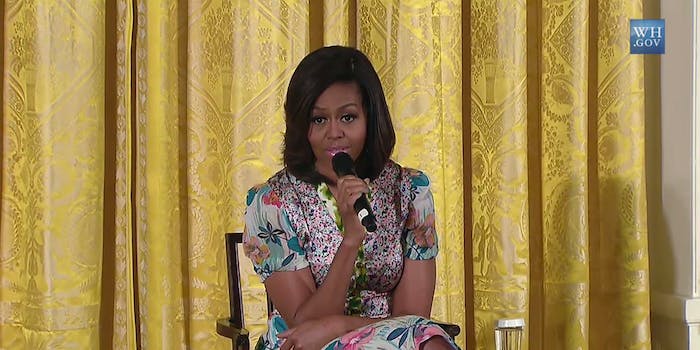 In her defense, the FLOTUS has the arms of a 26-year-old woman.

Age ain’t nothing but a number—and a wrong one at that, if you’re this little girl.

The youngster was part of an audience that attended a Q&A session with First Lady Michelle Obama for Take Our Daughters and Sons to Work Day at the White House on April 22. The First Lady answered questions about past presidents, whether she preferred Bo or Sunny (she took the diplomatic route and said she loved them equally), and if she had to dress nice all the time. (Yes, unless nobody’s watching.) It’s pretty adorable.

Around the 19:24 mark, however, one girl came in with a hard-hitting question: “How old are you?” When the FLOTUS answered that she was 51, the girl responded with adorable incredulity.