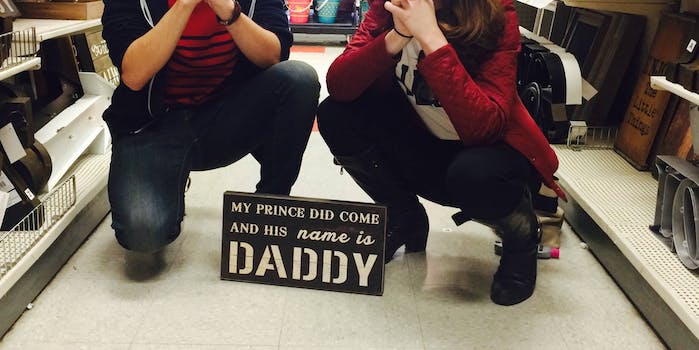 Why did Michaels pull this amazing ‘daddy’ sign from stores?

You’d think that Michaels, the hot retailer for scrapbooking moms and 5th-graders in need of poster board and paints, would be the most G-rated, vanilla place around. But it turns out that someone at the company might be down to get tied up with yarn by “daddy.”

The picture has racked up tons of notes and was largely an inside joke for Tumblr. But more recently, the sign was brought to the attention of the Michaels higher-ups.

Author Catherynne Valente also noticed the sexually-tinged sign and tweeted out a picture.

Valente didn’t @ the crafts store, but they did catch wind of it. And, unfortunately, it looks like they pulled it from their shelves. Now where will daddy-lovers get their interior design pizzazz?

@catvalente We are removing this product from our stores. We appreciate you looping us into this conversation.

This all went down in April, but with Tumblr realizing that the sign was no more, the original post has been making the rounds once again. User ahsadler wrote: “i can’t believe we kinkshamed michaels into a product recall.”

Daddy won’t be too happy about this.