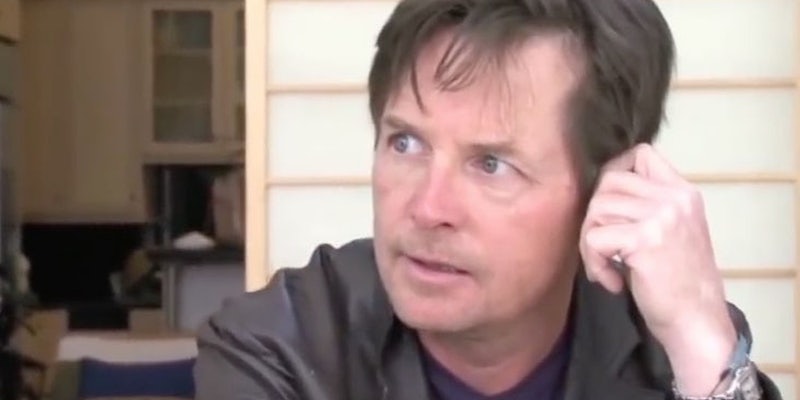 Michael J. Fox had a great comeback to the jerk who asked him to do the Mannequin Challenge

In case you missed its big moment at the end of October, here’s what you need to know about the Mannequin Challenge, the trend that has the nation’s teens frozen in place: A group of people stops what they’re doing, staying extremely still while someone walks through the scene taking 360 video. Then the whole thing is set to music—usually Rae Sremmurd’s “Black Beatles”—and it goes online.

It’s a cool and harmless trend, but leave it to the internet to find a way to make it into a mean joke. Some cool guy asked Michael J. Fox, the Back to the Future actor who was diagnosed with Parkinson’s disease at age 29, if he’d be participating in the challenge.

He was probably looking to score an easy punchline on Fox, whose Parkinson’s comes with uncontrollable shaking, not expecting the actor to respond.

But Fox did respond, brilliantly.

In the age of trolling and easy access to celebrities, a famous person can get mad about insults from Twitter’s rando class, or he can deflect the force of their own dumb jokes and use it against them. Fox just delivered a lesson in Twitter aikido, and everyone in his mentions went wild with admiration.

Really? You’re going to try to dunk on the guy who’s devoted his life to fighting a neurological condition that affects millions worldwide, and also kissed his own mom in an alternate timeline? Good luck with that.

Because this is Twitter in 2016, people are now trying to get “Ice” fired from his job at Foot Action.

*their RT @Sucmytwidder: @OfficiallyIce Wonder how @Footaction feel about there employees making fun of people with medical illness

This kind of mob action is also a terrible look—Michael J. Fox already handed him the punishment he deserves.