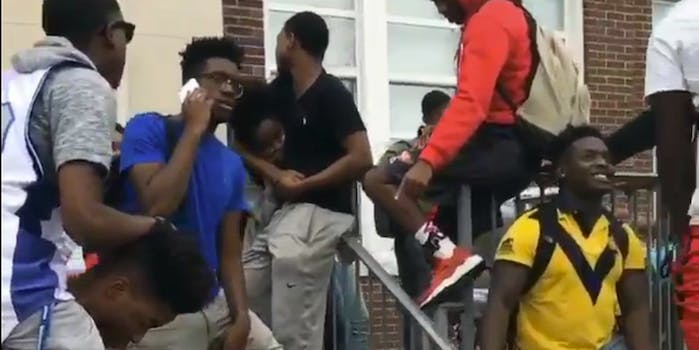 Stop everything you’re doing for the Mannequin Challenge

It's the latest high school craze.

Would you enjoy flash mobs if there wasn’t so much movement? Do you miss the passivity of #planking?

If you answered yes to either of those questions, stop (or freeze) whatever you’re doing and be introduced to a new internet fad. It’s the #mannequinchallenge, and with apologies to Andrew McCarthy and his 1987 film, it’s the funniest thing ever associated with a clothes-modeling life-sized doll.

Here’s the gist: Get high school and/or college students to pose while pretending to be in the process of doing something. Film the students in fast-cutting action. Throw it on the internet accompanied by Rae Sremmurd’s “Black Beatles.” Bask in all the temporary adulation.

Big props to the dude who was (mostly) motionless while standing one-legged on a stool in what appeared to be a science classroom, the future TMZ videographers who were deftly recording a fight at the football field, and the magical gymnasts who froze themselves while attempting back handsprings.

Perhaps even more impressive was the video made by the University of Michigan football team where there didn’t appear to be any movement made while the camera passed by.

Here are a few more examples of the growing movement, including apparently the one that started it all (according to Mashable).

New videos are seemingly popping up every two minutes on Twitter, and considering this trend likely will be over in a few month’s time—if not sooner—you’d be well-served to submit your version of the #mannequinchallenge as soon as your high school chemistry teacher dismisses class for the day.

Update 2:28pm CT, Nov. 4: Within a few hours of this movement going viral on Friday, the #mannequinchallenge found its way into at least one NFL team’s locker room. Here’s the version for the Pittsburgh Steelers.

Note the impressive strength from linebacker James Harrison as he freezes midway through a locker pull-up.

Update 10:55am CT, Nov. 6: Solid entries continue to roll in, including one from this high school volleyball team that accomplishes some nice tricks with the ball as a prop.

And this one from the University of Cincinnati dance team.

And this one from a bunch of strong and agile cheerleaders.