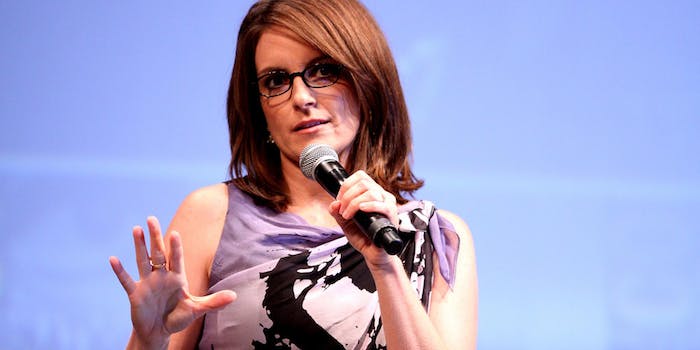 The former Disney CEO's sexist comments are a new version of a tired debate.

“Boy, am I going to get in trouble.” In a conversation with Goldie Hawn at the Aspen Ideas Festival, former Disney CEO Michael Eisner predicted the inevitable backlash his comments about funny women would generate on Twitter, but as the saying goes: A single man in possession of a good foot must be in want of an orifice in which to place it.

To wit, Eisner told Hawn, “The history of the motion picture business, the number of beautiful, really beautiful women—a Lucille Ball—that are funny, is impossible to find.”

"Beautiful women can't be funny" said Michael Eisner, a man who is neither beautiful nor funny.

Michael Eisner says funny, beautiful women are hard to come by. Apparently he's never come with or in one.

It’s a extension of the age-old argument that when it comes to women and humor, the twain shall never meet, which Eisner has merely amended: The issue isn’t that women aren’t funny but that hot women aren’t funny. However, the real problem isn’t that ladies can’t do comedy but that we’re continuing to create a system that sets women up to fail—one in which men get all the say. As Meghan Daum argued in a 2011 editorial for the Los Angeles Times, humor is about power, and women continue to be told they’re only 78 percent as funny as a man.

The tipping point of the “women aren’t funny” debate was undoubtedly the late Christopher Hitchens’ 2007 essay on the subject, which attempted to explain the female impediment to humor through a reasoned sociobiological analysis. Hitchens felt that men use jokes to attract mates, and a gift for comedy, thus, developed as a particularly male genetic phenomenon.

Directly echoing Eisner’s comments, Hitchens wrote, “Women have no corresponding need to appeal to men in this way [by being funny]. They already appeal to men, if you catch my drift.” Thus, if Eisner needs a mansplaining guide on why Megan Fox isn’t opening at the Apollo, Hitchens is ready to help: Because boobs, says science.

But even before Hitchens brought Darwin into the debate, the playwright William Congreve wrote a proto-thinkpiece on the subject, all the way back in 1695:

I must confess I have never made an Observation of what I Apprehend to be true Humour in Women… Perhaps Passions are too powerful in that Sex to let Humour have its course; or maybe by reason of their Natural Coldness, Humour cannot Exert itself to that extravagant Degree, which is does in the Male Sex.

While the 19th century critic Richard Grant White was famous for saying that a sense of humor was “the rarest of qualities in a woman,” these men lacked—aside from a public platform—the institutional power to do anything about their prejudice. What separates Eisner from Hitchens and White is that we have the power to treat Hitchens’ views on women like they don’t matter—the absurd ramblings of an out-of-touch curmudgeon. But Eisner isn’t just another talking head. Until recently, he was an incredibly powerful CEO, and his opinions unfortunately matter—because they got people hired.

In the case of Saturday Night Live, the opposite was true. In the 1970s, John Belushi used his considerable star power and outsize weight on the show to lobby against his female castmates—and especially the female members of the writing staff.

“Their battles were constant. They were working against John, who said women are just fundamentally not funny,” his co-star Jane Curtin told Oprah Winfrey. “So you’d go to a table read, and if a woman writer had written a piece for John, he would not read it in his full voice. He felt as though it was his duty to sabotage pieces written by women.”

The show had a similar problem with Norm Macdonald, who declined to share his Weekend Update desk with a female co-anchor, despite the fact that a woman hadn’t held the post in almost a decade. “I don’t want to fucking do [Update] with a lady,” he recalled in a recent interview with Marc Maron for his WTF podcast.

Thus, it’s not just about the fact that some men refuse to recognize the fact that women are funny—whether hot, ugly, fat, skinny, short, tall, or any measure you can think of—but that they get to deny those women a seat at the table because of it.

In a 2009 editorial, Nell Scovell—one of the few women to write for David Letterman’s talk show—argued that things have changed little since Belushi’s heyday, especially in her industry. “Out of the 50 or so comedy writers working on [late night talk shows], exactly zero are women,” Scovell writes. “It would be funny if it weren’t true.”

Today, even a progressive program like The Daily Show can’t seem to put women on the same playing field as men. In 2011, Jezebel’s Irin Carmon wrote about the toxic culture behind the scenes of the show:

It’s… a boys’ club where women’s contributions are often ignored and dismissed. … The story of Stewart throwing a newspaper or script at the show’s co-creator and executive producer Madeleine Smithberg out of displeasure with her work is an oft-told one among Daily Show veterans. Not long after the continued tension led Smithberg to quit in 2003, sources say Stewart refused to allow her onstage to accept the show’s Emmy, even though her work contributed to the win.

If I said before that women are worth 78 cents the amount of consideration a man is, this is clearly an overstatement: Sometimes they aren’t given any consideration at all.

In an exchange on Twitter this Monday, Hannibal Buress dismissed criticism from user Robin Hardwick, who pointed out that the writing staff for his show only includes one woman. Buress—who currently stars on Comedy Central’s Broad City, cited as at the forefront of TV’s female comedy avant-garde—shot back: “Good counting champ. Now move along.” If he thinks women are funny, clearly he doesn’t care all that much about employing them—or listening to their criticisms.

It seems easy to ignore the opinions of someone like Eisner—because in an industry where Melissa McCarthy, Kristen Wiig, and Tina Fey rule, it would be nice to believe that the forces of good have won the “Are women funny?” debate. It’s a question that comedian Michele A. Court said in a Guardian editorial that she’s tired of answering.

“I don’t ever want to answer this question again,” she wrote. “It makes me tired. It forces me to think of myself as ‘a woman who does comedy’ rather than as ‘a comedian’ which is how I actually think of myself.”

In continuing to have this conversation, we’re clearly inquiring about the wrong people. As long as men get to control the debate, to decide what does and doesn’t count as comedy, then humor will continue to be used as a tool that marginalizes and discredits women. Instead of wondering why there aren’t more women like Goldie Hawn or Lucille Ball, we should be asking why there are so many men like Michael Eisner. Then we’ll be getting somewhere.