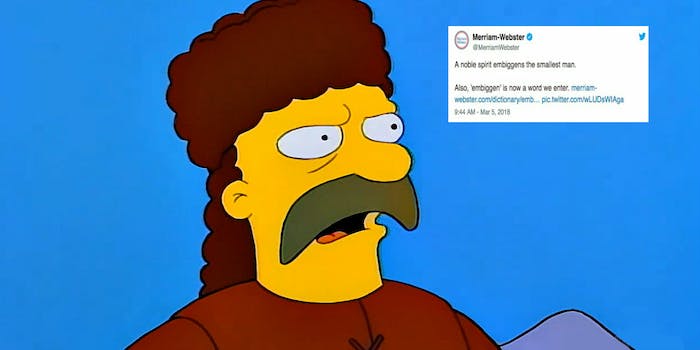 “A noble spirit embiggens the smallest man,” goes the quote from fictional Springfield founder Jebediah Springfield on The Simpsons.

“Embiggens?” says teacher Edna Krabappel during the episode, “Lisa the Iconoclast.”  “I never heard that word before I moved to Springfield.”

The joke, of course, is that neither “embiggen” nor “cromulent” are real words. At least they weren’t then. More than two decades later, that’s no longer the case.

Merriam-Webster has added “embiggen” along with around 850 other new words, to its dictionary. The dictionary defines the word as “to make bigger or more expansive” and notes its use is informal.

“In order for a word to be added to the dictionary it must have widespread, sustained, and meaningful use,” Emily Brewster, an associate editor for Merriam-Webster, said in a statement. “These new words have been added to the dictionary because they have become established members of the English language, and are terms people are likely to encounter.”

David X. Cohen, who wrote that particular Simpsons bit, wasn’t actually the first to use the term “embiggen.” That honor goes to a man named C. A. Ward, who also used the word as a sarcastic sendup of bad language way back in 1884. “But the people magnified them, to make great or embiggen, if we may invent an English parallel as ugly,” he wrote in the British journal Notes and Queries. “After all, use is nearly everything.” The word is also commonly used in the new Ms. Marvel comic, where the young hero often employs it as her battle cry.

Also, 'embiggen' is now a word we enter. https://t.co/3XmkZO0ral pic.twitter.com/wLUDsWIAga

It’s interesting to note that Merriam-Webster chose to include “embiggen” but “cromulent” was given the cold shoulder. Not to worry, though. Rival resource site Dictionary.com lists “cromulent” as meaning fine, or acceptable.