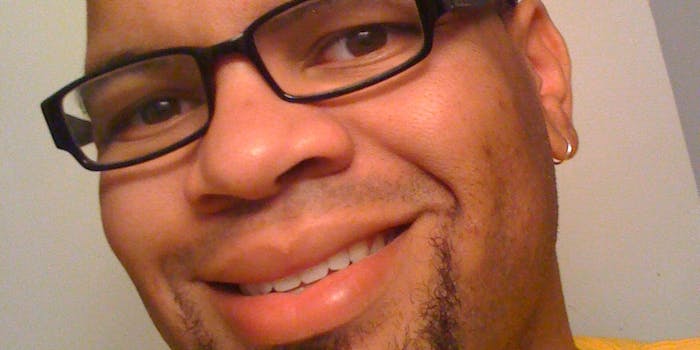 If you think Etsy is just for women, you haven't met the Men of Etsy.

You can buy vintage dresses, organic scented soaps, and handmade crystal jewelry on Etsy. Despite the femininity of much of its wares, the social marketplace has a small yet creative population of minority crafters.

And by minorities, we mean men.

When Etsy took a seller survey in 2009, 97 percent of store owners who responded happened to be women. And most shoppers on Etsy also are female, according to the blog Handmade Marketing. It’s not exactly a secret that Etsy is more popular among women than men.

Men of Etsy (MoE) is an internal Etsy team, 614 members strong, that aims to showcase the creative efforts of the male minority. Dennis Hicks, an Etsy store owner from Virginia who oversees the community, said the group helps members find crafters like themselves.

“You try to connect with somebody that has your same gender that is doing something similar with crafts,” he told the Daily Dot in a phone interview. “Back in the days chat rooms, you’d be one of two guys in the whole room.”

Hicks is a double minority on Etsy: he’s also an African American on a site that is dominated by white women. The 36-year old, who sells everything from handmade keychains to magnets in his store, said he felt “intimidated” at first.

“There’s a lot of women on the site and you have to think, how do you fit in and how does your product fit in,” he said. “Having this community on Etsy really alleviates that pressure about whether you’re doing it right or not.”

Hicks discovered Etsy from one of his art students. She sold handmade greeting cards on the site and wanted to show them off to her teacher. He was impressed. He joined Etsy in January 2010. He still works full time as a university administrator, but hopes to eventually make his Etsy store his full-time job.

“I’d love to do that, to say this is my full time job; to be creative every day and create things people love every day on my own terms, but that’s not my reality at this point,” he said.

Hicks became MoE’s captain in June. His duties include running the group’s Facebook page and Google group. Along with his group’s team leaders, he organizes community events and sales, like MoE’s current sale to raise prostate cancer awareness.

In an interesting aside, Hicks noted that the group’s breast cancer sale did far better, “probably because there are more women on Etsy and [there is] more awareness of the disease.”

One of Hicks’ team leaders is Adam Stanley, a 28-year-old crafter from Maryland. Stanley, who joined the site in August 2010, said he likes the uniqueness of being male on Etsy.

“Being a man on Etsy is fantastic!” he told the Daily Dot in an email. “We as men instantly stand out here, you can flip from shop to shop and 90 percent of the time know if you are looking at a shop created by a man or a woman,” he said. “When [women] are shopping for the men in their life they know the shops they can rely on for that perfect gift.”

Stanley sells men’s vintage ties and accessories in his shop Gallo Grotte. Gallo is his grandparents’ last name; Grotte is the Sicilian town where they grew up, met, and fell in love. From his store’s name to his coworker, his brother Mike, Etsy is about family. He spends 40 hours a week working on his store.

He stumbled upon the MoE community by a happy accident and became a team leader as he became more and more involved.

“Etsy is wonderful, even without Men of Etsy, but MoE creates a oneness here for men, a place that we can call our own, kinda like a garage or den,” he said. “In the immortal words of Tim Allen, Arrrh! Arrrh! Arrrh!”

Both Stanley and Hicks said MoE provided a huge pillar of support for them as sellers. Hicks said one member of the group helped him improve his product lighting by going over his store photos with him and discussing what works and what needs to be improved.

Stanley said he appreciates having like-minded people to promote and to help him promote his work “only a click away.” He said MoE is constantly working on new projects and fundraisers, like the prostate cancer awareness treasury he and Hicks are helping to run.

“Though small in numbers we are large in passion and creativity,” he said.