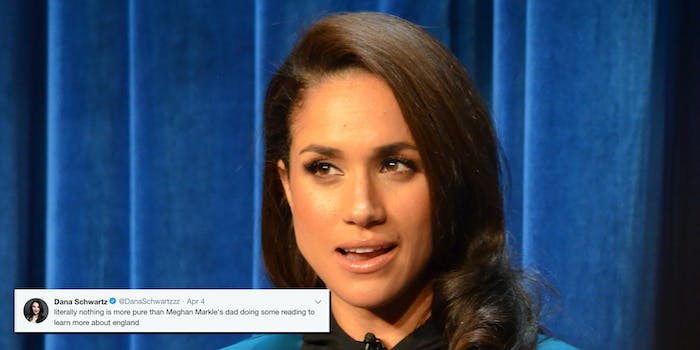 Such a dad move.

A certain future in-law to the Royal Family was caught doing some light research about the country his daughter will help rule one day, and Twitter thinks it’s fantastically hilarious.

literally nothing is more pure than Meghan Markle's dad doing some reading to learn more about england pic.twitter.com/6lgvHg0pHK

Folks on Twitter thought it was extremely amusing. While Americans tended to think the photo was endearing, British users took it as an opportunity to make a swipe at Americans’ intellect.

"Dad, don't you dare embarrass me in front of the Queen." https://t.co/cmxADW4ufr

Meghan Markle’s dad reading a picture book about england when his daughter is about to marry into the royal family is me cramming before an exam pic.twitter.com/Ifa1I7PKUm

me after ending an email with "cheers" pic.twitter.com/FZ3RNoyZr6

I wish Trump had read about about America

It’s called Images of Britain! The most American way to learn about Britain there is. LOL

Dear Mr. Thomas Markle (or as you're currently known to the world, Meghan Markle's dad), Welcome to the bibliophile side. #WeHaveBooks #LotsAndLotsOfBooks https://t.co/oVT3DFH6od https://t.co/BocjnsPlfU

I would love this tweet if people could learn that Britain is not England. https://t.co/TOXIHjSPk1

It’s hard to say how Meghan feels about her dad becoming a meme since she reportedly deleted all of her social media accounts in January. Perhaps she’s just grateful to see the press turn their attention away from her single gray hair and toward her dad instead. We like to imagine he’s been texting her for days all the fun facts he’s been learning about Great Britain.

We’re happy to report that Markle’s choice of research has 4.67 stars on Goodreads—the three whole readers who reviewed the book thought it was great. For under $5 on Amazon, fans of the Royal Family can catch up on their research, as well.