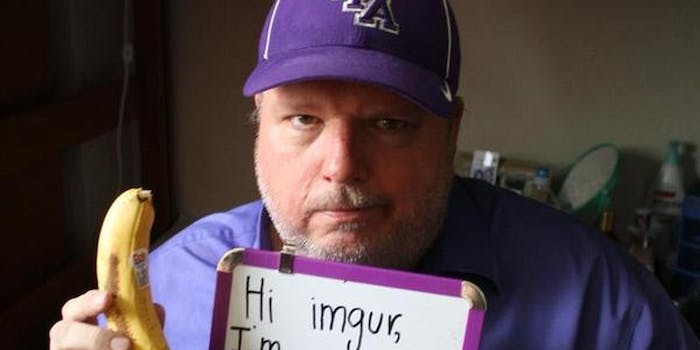 Imgur adopted a 50-year-old man as its official dad

NiftyNarwhal’s father is the official dad of Imgur, a popular image upload site and viral-image based social network.

Nifty is actually Elizabeth Peavy, an 18-year-old Texas college student. She started posting hilarious quotes from her 50-year-old father on the site, and they quickly became popular. Many of his quotes are said with disgruntled confusion about the Internet, which makes them even more adorable. At first, Nifty posted his quotes without him knowing, but he found the post and commented on it, so soon he was in on the fun and contributing to his fan base’s delight. She also included a photo him, frowning and holding up a proof sign for Imgur. It seems like she’s teaching him about Reddit—including some stuff he probably didn’t need to know about. The posts have been receiving an overwhelmingly positive response with NiftyNarwhal’s poppa being named “The Dad of Imgur.”

The posts have nearly 170,000 views, propelling NiftyNarwhal to “Glorious” status on the site, which means she has 20,000 reputation points.

In an interview with the Daily Dot, Peavy said she and her father are super close and share the same sense of humor. When her family was supposed to visit her for Parents’ Weekend at her university, her brother got sick and so only her father came. They ended up spending most of the time bonding over funny Imgur images

“He kept asking me questions and making quirky little dad jokes. My dad is a very private person, but I’ve always posted statuses or made tumblr posts about things that he’s said or done, and those have always gotten a lot of attention. So, I did what any irresponsible teenager would do, and made a running word document of things he said. I posted it to mess with him,” she said.

She then told him that she’d posted a list of his quotes and that his mission was to dig through Imgur to find it.

At first he resisted his newfound Internet fame, but the positive feedback made him reconsider.

“He found it relatively quickly, and face-palmed and said ‘I trusted you,’” Peavy said. But now he’s loving it. She added: “He’s really embraced the whole ‘Imgur dad’ thing and he’s having lots of fun.”