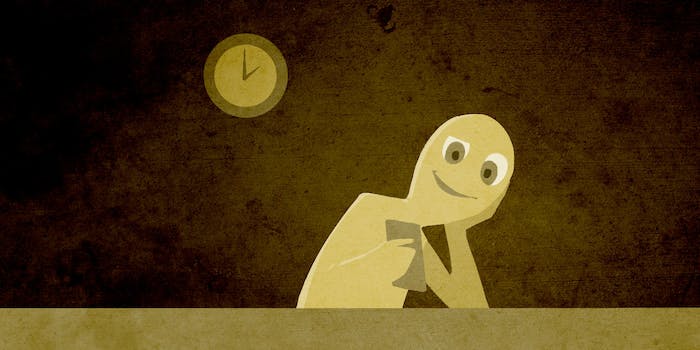 What's keeping you from bed?

It’s late. Everyone else has gone to bed. Your mom turned in at 8pm because she has to wake your younger siblings up for school in the morning. Or all your housemates have been asleep for hours because they’ve got a volleyball tournament the next day.

Meanwhile, you’re in your room. There’s an empty Papa John’s box on the floor—you finished the last slice 45 minutes ago. Maybe you’re still up reading about octopus mating habits. Perhaps the dankest memes of the weirdest corners of the internet are keeping you from bed. Or you’re on the 12th episode in a row of Orange Is the New Black.

We’ve all been there. It’s a situation so real that it has, of course, found its way into memedom. And there’s a whole flurry of things people of the interwebz are too distracted with to hit the sack for a good night’s rest.

me: I should probably be a responsible child and go to bed at 10
me at 2am: pic.twitter.com/FSaas9aB8U

me: i should sleep early tonight
me at 2am: pic.twitter.com/0jdxyngC1x

The meme has been around for a while, but it often sees a resurgence when Netflix releases a new season of television and people are up binging as many episodes as possible. When Orange Is the New Black‘s season 4 premiered in mid-June, a slew of these memes surfaced.

me at 11pm: ok that's enough OITNB I'm going to go to bed now
me at 3am: CAUSE YOU GOT TIIIIIIIIIIIIIIIMMMMMMMEEEEEE pic.twitter.com/zok4HyQLuw

But aside from crazy dancing and prying open your eyelids to get to the finale of OITNB, there are some completely ridiculous examples of what people are getting into at this time of night.

“I’m going to bed early tonight”
Me at 3am: pic.twitter.com/1J5gQWx6MJ