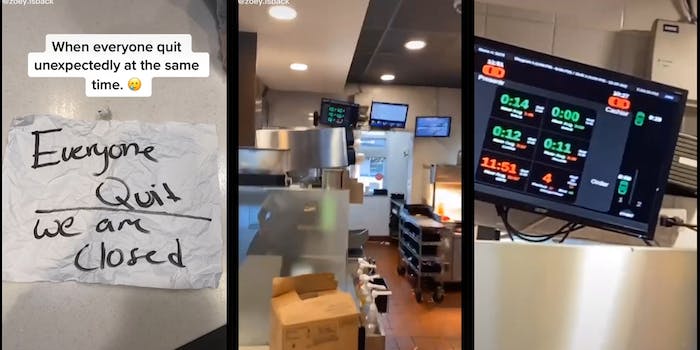 'Everyone quit, we are closed.'

According to a TikTok posted by TikToker @zoey.isback, the entire staff at one McDonald’s location spontaneously quit, leaving the restaurant empty.

The video begins with a handwritten sign reading, “Everyone quit, we are closed.” As the camera pans around the empty McDonald’s, the TikTok caption reads, “When everyone quit unexpectedly at the same time.”

The TikToker alleged in the comments that “the store was ran by teenagers and it was a terrible work space.”

In a second TikTok, viewers see a group of people in McDonald’s uniforms loitering outside and looking in through the windows. @zoey.isback wrote that she “barely recorded” anything while she was there, so there aren’t any more details on how the mass exodus went down. But she did joke about not having to clean anymore because she’d quit the job mid-shift.

Viewers lauded the TikToker and their former co-workers for quitting on the spot, with many even noting they “wish this would happen more often.”

“Good for you guys,” an apparent former service worker wrote.

“We don’t need corporations, they need us,” another said.

“What if everyone did this?” a third pondered.

These TikToks are pretty satisfying for anyone who has ever fantasized about quitting their minimum-wage job. But they also represent a more widespread trend. People are quitting their jobs in record numbers right now, something that’s being described by business leaders as a labor shortage, but is more to do with workers being frustrated by low pay and poor working conditions. This is definitely a major issue for fast-food chains, many of which continued to stay open throughout the pandemic while failing to pay its workers a living wage.