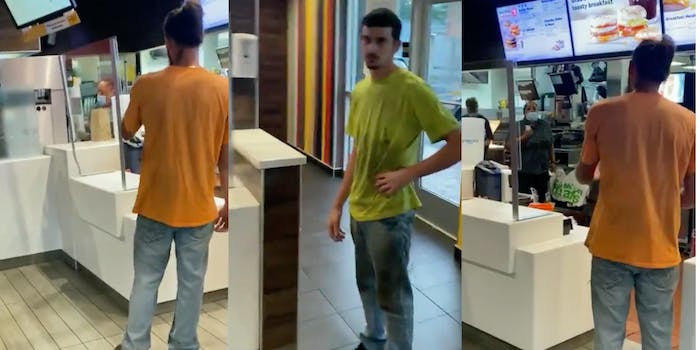 ‘Would you put up with this for minimum wage?’ Video of men bullying McDonald’s worker over McGriddle sparks debate on wages, worker shortage

A video of two angry McDonald’s customers bullying restaurant staff has sparked a debate on wages and the shortage of workers currently impacting the industry.

“If I’m a customer in the fucking curbside, you should ask what car its in and not fuckin’ be rude as fuck like the mean-ass bitch you are,” a customer in an orange shirt can be heard saying in the video shared by Twitter user @davenewworld2.

The video starts with two men, who are upset with the McDonald’s employee because they allege she was rude and that the sausage was missing from their McGriddle—a breakfast sandwich made of pancakes, a choice of sausage or bacon, egg, and cheese. They hurl insults at her as she tells them to “have a nice day” in the clip.

According to a followup tweet from @davenewworld_2, this happened in Bradenton, Florida.

The treatment of the fast-food workers in the video prompted compassionate responses from folks online. Twitter user @Kaylan_Donahou said she was glad someone stood up for the workers, referencing the person filming.

“I’m just glad I’m one of these videos someone else standing there finally actually said something,” @Kaylan_Donahou wrote. “Usually you always see people just standing around. Wayyyy too often the bystanders don’t say a damn thing.”

Others shared their similar experiences working in the service industry— McDonald’s or otherwise.

“I remember being 16 working the MCds counter, we just started selling the Big Xtra,” @VioletWanderers wrote. “Dude apparently didn’t know it came with tomato came back up and threw the sandwich and drink at me and screamed in my face about how he hated tomatoes. 45 yr old man assaulting a teenager.”

As always with incidents that take place in fast-food restaurants, the topic of wages came up. The federal minimum wage remains at $7.25 hourly, which was increased from $6.55 in 2009. It has not been adjusted since.

“Perfect example as to why fast food workers need to be paid above the minimum wage,” they wrote.

The idea that workers don’t want jobs in which they are both underpaid and subjected to such abuse was the main takeaway for many, including @Konabean328.

“And you wonder why people don’t want to go back to work for minimum wage?” @Konabean328 wrote.

With people demanding better pay in exchange for their labor, the U.S. labor market is reportedly experiencing a “democratization” of the workforce. The withholding of labor is reportedly forcing employers that have historically offered low pay to increase their wages in order to meet these demands. McDonald’s is just one of many that have begun offering higher wages and even hiring bonuses and (controversially) free iPhones.

If that weren’t enough, there’s one more kicker.

“Man, Bert and Ernie grew up to be mean,” @jayblackisfunny wrote.