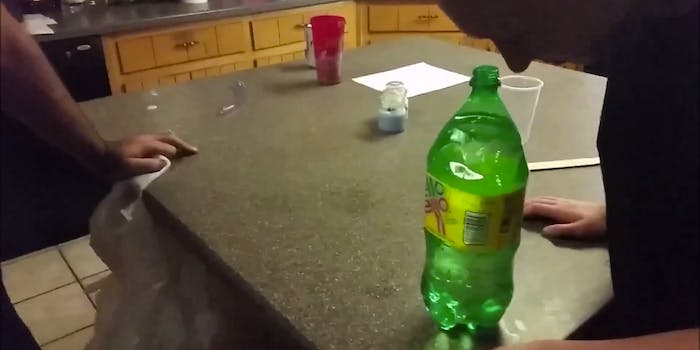 Man pranks teen daughter with the oldest trick in the book

And it's pretty simple, too.

A teenage girl’s bold claim that she’s seen every video on the Internet explodes in her face after her dad hits her with a prank that probably predates YouTube.

It’s literally impossible for Eric McCowan’s daughter to have seen every video on the Internet, but McCowan decided to bring back an oldie to test her knowledge anyway. If she had actually seen every video, she would know what was coming.

The prank is a pretty simple one. Just put a nickel under a soda bottle filled with water, do some “magic” with a plastic bag, and wait for your victim to check it.

It’s not an exact replica of the classic joke, because McCowan was concerned about his daughter’s safety. Nevertheless, the result is spectacular, and his daughter seemed to take it in stride.

“This morning my son asked my daughter ‘how’s your eye’, she said fine,” McCowan wrote. “He asked ‘how’s your ego’, she said, it’s a little bruised. lol. She was laughing at it still, and she was the victim in the video.”